There was a major development in the Greece bailout crisis today (Thursday) as Prime Minister Alexis Tsipras plans to hand in his resignation this evening. 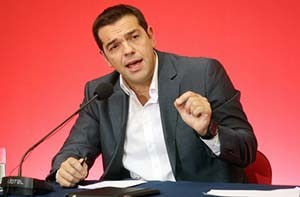 According to reports, Tsipras intends to tell Greece's head of state, President Prokopis Pavlopoulos, late Thursday he can no longer continue as premier due to the lack of a stable governing majority in parliament.

Tspiras hopes that new elections will allow him to win a stronger mandate to implement the bailout deal.

That news came after cash-strapped Greece avoided defaulting on a debt payment earlier in the day. The Greek government made a crucial payment to the European Central Bank Thursday after receiving fresh aid from its Eurozone allies.

The European Stability Mechanism board on Wednesday said it "will provide up to 86 billion euros ($95 billion) in financial assistance to Greece over three years." Greece received the first 13 billion euros ($14.5 billion) on Thursday. That allowed it to repay its debt due to the ECB, thus avoiding a chaotic default.

The bulk of the new aid package will be used to pay down exiting debt rather than rebuilding Greece's ravaged economy. That has drawn widespread criticism that Eurozone creditors are simply repeating the same austerity policies that have led to six straight years of recession in Greece.

In order to qualify for the aid, Greece was forced to agree to a lengthy list of changes aimed at improving the way the country operates. Those changes include scraping a range of exemptions and amnesties applied in tax collections, key reforms to healthcare, and more.

Those stringent terms have left the ruling left-wing Syriza party split. The political turmoil led to Tsipras's resignation, which will clear the way for early elections.

The International Monetary Fund (IMF) should buy all outstanding private Greek debts, then forgive Greece for these debts. Then the private banking sector is not hurt and not penalized. After all, paper money is just fiat money, taken out of thin air. IMF is the agency of last of last resort that will save Greece. It is not the European Common Bank. I think this is Alexis Tsipras' game plan and he will succeed. TAKE THE GREECE PEOPLE OUT OF THEIR MISERIES, enough is enough, and start over. In ancient biblical times, all debts were forgiven after fifty years. This is the only noble way to get out of this mess.

Prime minister Alexis Tsipras is heading back to Brussels today for another meeting with the leaders of Germany and France, in yet another attempt to broach a compromise and unlock bailout funds for his country. But the meeting with Angela Merkel and Francois Hollande, on the sidelines of the EU summit with Latin American and Caribbean nations, is unlikely to deliver a breakthrough, as Athens and her creditors remain divided over the measures that Greece must take.