As much as it pains me to contribute to the thousands of articles mentioning Donald Trump, this one is different…

It's different because I'm going to show you exactly how you can cash in on a concrete pattern, going back three-quarters of a century, which appears across the markets during the "election cycle," or the last two years of every American presidency.

No matter what "The Donald" says or does, no matter who wins, this event has offered savvy investors clockwork profits, and it will do the same for us, too, so it's important to start getting ready now.

In Donkey vs. Elephant, the Bull Always Wins

My wife and I actually skipped seeing Donald Trump when he was in town recently. Somehow we had VIP access to the candidate and the opportunity to take some pictures.

But rather than join him at the banquet, I decided to stay home to do what I really love doing: poring through gigabytes of data and my proprietary charts. 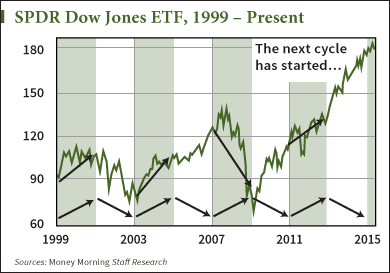 What I found on this chart that night was way more exciting than any meet-and-greet.

When you superimpose this over Washington's "work" schedule, the green areas are the last two years of the four-year cycle; it's the time when work stops and campaigning starts.

There has only been one instance where we were heading into the last two years of a four-year presidency that the stock market lost points. And that of course was during the 2007-2008 election cycle, when Republican John McCain was facing off against a young Democrat, Barack Obama.

As we all remember, the stock market was in a rapid free fall at the time due to the meltdown of the global financial system. But… it certainly didn't take long for the pattern to get back on track. The following 2011-2012 cycle saw the pattern return with a vengeance, giving gains of 15%.

This Has Generated Serious Profits Since F.D.R.'s Day 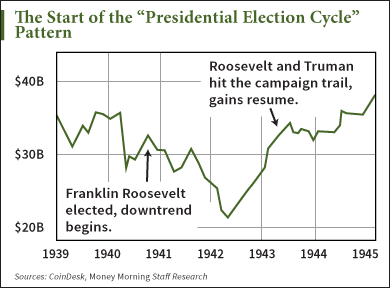 November 2015 will start another cycle, so there's still time to get in position to make the trade I'm about to show you.

This Next Pattern Guides the Trade

Well, at least you're executing this idiotic cycle trade with options. Limits the loss.

Playing the Presidential cycle in the face of an artificially puffed up market that's showing clear signs of topping after going up for nearly 7 years in a virtually uninterrupted 45 degree channel is like betting on George Pataki to win the Republican nomination, because he's never lost an election.

There are MUCH MUCH more powerful forces at play … and that's assuming that the Presidential cycle is anything more than a statistical oddity to begin with.

It's as if the roof's about to cave in and you're busy picking paint colors.

By the way, how's that Pandora put trade workin' put for ya? Yeah, we'll never hear about that again. The winners get ballyhooed to the moon. The dogs never get another mention.

If you're buying calls why do you say "We'll be put-trading the presidential election cycle…?"

SLB held to Aug 20 was a profit of $113.02 less fees/comm. The monthly cost $162.50 does not justify the results when TLT and DHI are going against Us closing out August.

Perhaps an analysis expanded to 20 years of data will better represent a formidable trade pattern?

What is there to look forward to? The Elections? How about the Super Bowl?

I'm feeling the same pinch as much of the market in general is not behaving as anyone would expect outside of the Chicken Little doomsayers.
The DHI trade may have looked at stats over a ten year cycle that finds the statistical drop that Tom is pointing us towards. However, I think what it failed to pick up on was the trend over the last five years that sees housing starts trending lower and housing surpluses (new and used) trending lower. Ignore the general media generated noise of panic over the China markets however, one cannot help to wonder if the devaluation of the Yuan reduced some materials prices for homebuilders. Looking historically at trends for all homebuilders, that market has been sliding downward over the last 5-7 years. Probably on purpose led by the Homebuilders Association or some such. This is coincidence in my opinion that the new home market would be strong at this particular time.
As for the TLT trade, I generally avoid those I don't have a decent understanding of and the Bond market is one of those. Additionally, and call it superstition, in my field of Consulting Engineering, the abbreviation for toilet is TLT. I can't put my money into one.

How about those "puts",the bears are coming

Why wait to November to place this trade?

How can i learn to trade options? Any good schools?

Again, standard forms are available from your secretary of state or state corporations office as a starting point. Though many people hire a CPA or attorney to help manage the paperwork, you can do it yourself with the help of basic how-to books such as Mancuso's.

Statistics are great, but they like everything else, do not work 100%. Even with a 10 year backtest, things such as China, Commodities dropping, and Currency shifts arent something that can be incorporated into past statistics. I have been at this for over half my life, and these market tsunamis occur every decade. The greedy get margin calls and are out of this business, while the calculated traders take calculated losses, and come back from them.

Pandora, I answered in another column… cant win them all, and fallingman if you are a trader than you should know that. I can only imagine what a short stock trader would be thinking right now with a move like that. Thats why I trade options, to limit the times when things go against you. If you don't know where your going, any road can take you there.

Chidi, you dont have to go any farther than right here to learn options… I teach the basics here, calls, puts, spreads. Once you get familiar with them, start to understand the difference between overvalued and undervalued options by looking at historical IVs. This is where a true options trader lives.

Oh I almost forgot… why wait until November.

Well, you could start right now but why? In this market its like trying to cross the freeway during rush hour traffic. Best to let the pattern of Mid Sept to Mid Oct pass us by, and enter when volatility comes off. We are entering a timeframe where the overall market tends to crest in volatility, and that typically means drops.

I am not trying to time the bottom here, or anywhere for that matter. I simply look at this along with other patterns that show themselves as historically good entry points.

One more thing… I agree with Wilson never to get into anything that you don't understand, though the "toilet" trade you referred to (TLT) was a winner… What you dont know is more likely to hurt you than what you do…