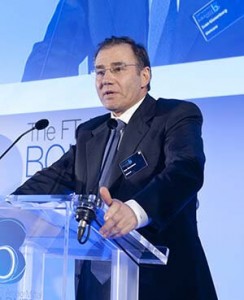 According to the Bloomberg Billionaires Index, Glencore CEO Glasenberg lost more than a quarter of his wealth from Friday through Monday. Some $500 million of his $1.9 billion in personal wealth has been wiped out by the market since Friday.

Year to date, the fortune of the Glencore CEO has dwindled by more than 70%.

Shortly after the mining titan's initial public offering in 2011, Glasenberg debuted on the Forbes billionaire list at No. 301. He has since fallen to No. 1,335, with Glencore shares down 85% since going public.

Mounting fears of a serious slowdown in China's economy have pressured metal prices and, in turn, Glencore stock. Copper, aluminum, and nickel are all down more than 25% compared to a year ago.

In recent weeks, Glencore CEO Glasenberg has tried to reduce the company's debt by selling shares and assets, as well as scrapping a series of dividends. Yet the moves have done little to ease fears over Glencore's swollen $30 billion debt pile.

While Glencore shares jumped 17% on Tuesday, they're still down nearly 77% in the last year.

And according to Money Morning Global Credit Strategist Michael Lewitt, the troubles for Glencore CEO Ivan Glasenberg are mounting...

"Right now, the Glencore event is still playing out, but one thing's certain," Lewitt said. "It is going to have a near-immediate, hard-hitting effect on all the risk assets out there - just like AIG's collapse did in 2008."

Tomorrow, Lewitt will be detailing how the ripple effects of Glencore's collapse will send the commodities sector into total chaos. Sign up for Money Morning to receive the full story - it's completely free...