Today's (Tuesday) Microsoft event was a showcase for a lot of slick new devices, including new Lumia phones, new Surface tablets, and the company's first-ever laptop.
But as impressive as they are, for Microsoft Corp. (Nasdaq: MSFT) investors, the flashy new gadgets aren't the only – or the most important – takeaway.

Even though it sells smartphones, tablets, and the Xbox One game system, only about 10% of MSFT's profits come from hardware. 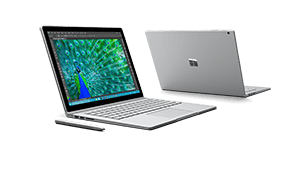 But all of those things are tied together by Windows 10, the latest version of Microsoft's venerable operating system. Microsoft bragged often that 110 million devices are already running Windows 10, just 10 weeks after launch.

The snazzy hardware is part of Microsoft's strategy of rejuvenating the image of Windows as the tired old OS of PC desktops.

Nadella wants consumers to see Windows as an OS just as suited to tablets and phones as it is to desktops and laptops. That's why Microsoft put so much effort into making sure Windows 10 would work the same across all these devices.

The hardware effort is Microsoft proving – and quite convincingly – that Windows 10 mobile hardware can not only be as good as the stuff Apple Inc. (Nasdaq: AAPL) and the Android world makes – it can be cutting-edge.

The emphasis on the ecosystem started with a Microsoft event hashtag the company created: #Windows10devices. MSFT has watched Apple and Google Inc. (or as it's now known, Alphabet Inc. (Nasdaq: GOOGL)) dominate mobile with the iOS and Android ecosystems for seven years now, as it struggled with just a few percentage points of market share.

Windows 10, and the devices unveiled at the Microsoft event today, are the company's best effort yet at changing that dynamic. Microsoft is determined to put the Windows ecosystem back into the mobile conversation.

Investors seem to understand this is a big deal. As details of the Microsoft event leaked out over the past week, Microsoft stock has climbed. Over the past five trading days, MSFT stock is up more than 7%. It was trading today at about $47.

The genius here is that these devices are not only beautifully designed with several innovative features, but are all powerful enough to run Windows as well as a PC.

Here are the highlights from the Microsoft event…