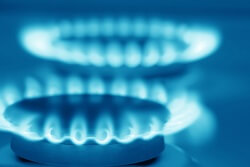 But natural gas prices are on the verge of a huge rebound. According to Money Morning Global Energy Strategist Dr. Kent Moors, there are some significant changes happening to the industry that will transform natural gas investing forever.

"'Brave New World' is going to be an understatement," Moors said in August. "Please understand the importance of what we are rushing into: nothing less than the emergence of an integrated global natural gas market."

According to Moors, new forms of natural gas consumption will boost demand and prices to record highs in the coming decades.

Here are the three "game changers" that will bring in the next generation of natural gas investing...

Electricity companies are switching from coal usage to natural gas usage due to strict carbon emissions laws. By the end of 2015, coal's share of power production should only be about 35.6%. That's down from 38.7% in 2014.

Meanwhile, natural gas' share of power production should increase from 27.4% last year to 31.2% this year. Natural gas should also make up 22% of all new generating capacity coming on line this year.

The massive transition to gas-sourced power will consume a huge chunk of excess supply. After all, natural gas inventory is estimated to reach 3.87 trillion cubic feet by the end of October. That's 69 billion cubic feet above the current five-year inventory average.

And as consumption skyrockets, natural gas prices will climb accordingly.