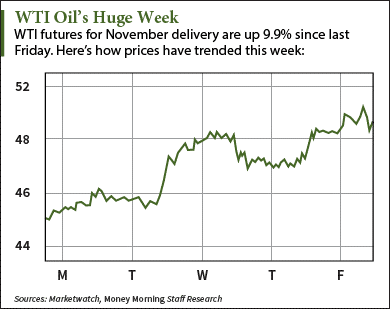 Brent crude oil prices today gained less than their U.S. counterpart. They were up 0.02% and trading at $53.39 a barrel. The international benchmark is up 9.4% this week and 8.8% this month.

Brent crude is the international price benchmark. It's considered "light" crude because of its low density and sulfur content.

Here's why oil prices are surging to a six-year high…

"With a slowdown in both the U.S. and the global scene, the U.S. Federal Reserve seems to be growing more dovish," said Daniel Ang, analyst at Phillip Futures, to The Wall Street Journal. "Oil prices gain support as a result of a weaker U.S. dollar strength as this makes USD-denoted oil cheaper."

I'm not surprised at all. I hope some of you got hold of oil stocks while they were at their lowest, because now it will start paying off.