Last week, I called out drug company Valeant Pharmaceuticals International Inc. (NYSE: VRX) as a bad investment and a stock that's going down.

I showed you how it operates as a highly leveraged "serial acquirer" that buys other companies only to fire their workers and hike the prices of their drugs.

I also told you the company's strategy was about to backfire.

But that happened faster than even I expected…

On Thursday, Valeant announced the U.S. government subpoenaed the company over its drug-pricing practices for two specific drugs. Valeant stock dropped sharply in that session and then recovered on Friday. But investors were clearly nervous as they waited for the company's third-quarter earnings report on Monday.

It turns out they had good reason to worry. Not so much about earnings, which came in on target. The company earned $3.54 per share on $3.6 billion in revenue, in line with Wall Street expectations. And it nudged up guidance for the year to between $11.67 and $11.87 in earnings per share and said revenue would be between $11 billion and $11.2 billion.

But management announced several changes to Valeant's strategy that suggest that the company is changing course. And investors reacted by sending shares into a freefall. The Valeant stock price went from $177 at close Friday to below $160. It recovered to $163 by close Monday but was under more pressure Tuesday morning – and will stay there. 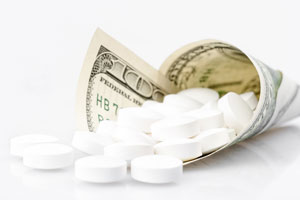 The changes address two of the concerns that I raised last week. Just to review, concerns about Valeant center on the following issues. First, it is highly leveraged with $30 billion in debt. Second, it relies on buying competitors and firing their employees. Third, it profits from sharply raising the prices of newly acquired drugs, leaving consumers or, more often, the government and insurance companies to pay the tab. And fourth, it spends only 3% of revenue on R&D compared to 15% to 20% for most other drug companies.

This predatory business model has enriched management and a bunch of hedge funds but has left everyone else with whom the company has come into contact severely damaged.

Having seen its bloated stock price sink 30% in the last few weeks, management told the market Monday that it was going to change its stripes. And the market didn't like what it heard one bit.

Here's What Valeant's Going to Do (and Why It's Bad)