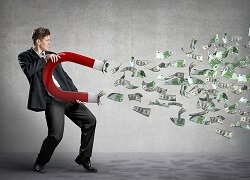 A larger, active user base makes Facebook more appealing to advertisers, which brings in more revenue from advertising.

At its opening price today, the Facebook stock price has jumped nearly 65% since its initial public offering (IPO) price of $38 per share.

Money Morning E-Commerce Director Bret Holmes says the sky is the limit for Facebook and its advertising business. You see, Holmes uses web advertising across multiple social media platforms as part of his job here at Money Morning.

"They are still their only advertising client," Holmes said. "Wait until they supplant AdSense as the de facto ad serving platform for the rest of the world. Facebook will be the largest thing the Internet has ever seen for advertising and five times bigger than Google has ever been (on the Internet - not in aggregate for all business). They will drive more conversions, deeper spends, and more interaction. They are just getting started."

Advertising will continue to drive the FB stock higher from here, but the social media behemoth has additional sources for revenue that it hasn't even tapped into yet. Here's how Facebook is going to make even more money in 2015 and beyond...

I agree with Brett Holmes. About me: 20+ years in internet media and advertising, prior direct and promotional marketing, agency principal.

Only I wouldn't limit it to the Internet.

Say what you want about FB, but they have/are building an advertising platform that solves many of the issues with advertising in today's media world.

They have the scale of (the old) TV audience and targeting/analytics better than anything the ad world has seen hereto. They haven't even hit cruising altitude with video, messaging is still a dormant cash cow positioned to take advantage significant growth in that area, and they are tying together offline data to make advertising highly accountable.

The opportunity for brands that have ongoing relationships with their customers (read = almost everyone) are mapping their contact data to FB's files to create custom audiences. Advertising can now be delivered that is highly relevant, personal, and measureable.

Don't own a dog? You will never see an ad for dog food in your newsfeed.

Can you say that about TV?