When the Fed rate hike that nearly everyone expects finally happens, a lot of U.S. companies that have been surviving on cheap debt will get pushed into oblivion. 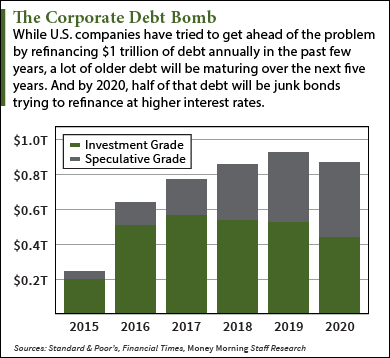 Remember, the U.S. Federal Reserve hasn't raised interest rates since 2006. And it has kept rates near zero since the end of 2008. In that time, corporate America has grown addicted to cheap debt.

But weaker companies - those whose high-yield debt is known as "junk" - have been borrowing just to keep the doors open. And borrowing by these companies was up 21% in the first six months of the year from the same period in 2014.

A Fed interest rate hike will force such "zombie" companies to pay investors more to buy their debt. And many won't be able to afford it.

"Because BB-, B-, and in some cases CCC-rated companies have been able to borrow at less than 5%, a host of zombie and future zombie corporations now roam the real economy," bond guru Bill Gross wrote in his August letter.

Such companies face an existential threat from a Fed rate hike. And if the Fed doesn't raise interest rates in December, it will almost certainly raise them in early 2016.

We're already seeing signs of trouble. So far this year, 47 companies have defaulted, the most since 2009.

One zombie company, Unisys Corp. (NYSE: UIS), ran into problems in September when it had to withdraw its offer to sell $35 million of bonds. The junk bond offering, with an expected yield of about 8%, failed to price. Investors wouldn't bite.

The Unisys withdrawal was the 15th of the year. So far in 2015, $4 trillion in bond offerings have been withdrawn.

But investors should know a Fed interest rate hike will hit some sectors harder than others. Here are the ones most at risk from a Fed rate hike...

I think this 0.25% interest rate panic is another Wall Street gimmick to create transactions. Is the world going to stop because of a 0.25% rate increase? NO Will people quit buying homes? NO If a company issued bonds @ 5% and already received the money, what does it matter to them if rates increase so little??? It's all nonsense to instill fear into people, just like the Greece crisis and the China slowdown, etc etc That's why its best to not read newspapers, magazines, watch business news on TV and most of all to read investment advice(research) bull.
I can't wait till they raise rates and watch everyone backtrack on their previous end of the market comments.