With the FOMC meeting ending today, investors have been asking, "When will the Fed raise interest rates?"

It will be at least another two months before the central bank makes a move. 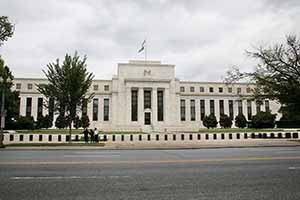 Economists and investors widely expected the Fed to hold short-term interest rates near zero at this week's meeting. Now they're dissecting the policymakers' statement for answers to the question, "When will the Fed raise interest rates?"

Today, the Fed's hawkish tone suggests a December rate "liftoff" is a possibility.

Fed officials indicated in a statement today that they have become less concerned in recent weeks about volatile financial markets and uncertain economic developments overseas. They also pointed specifically to the next meeting (Dec. 15-16) for when they would be assessing whether it is time to raise rates.

However, there is still some reason to believe the Fed's pause may extend past December.

The Fed noted that net exports have been soft, the pace of job gains has slowed, and seriously dwindling labor force participation is responsible for the low 5.1% unemployment rate. The Fed also said it wants to be "reasonably confident" that low inflation will rise to its 2% target.

Importantly, the Fed did not repeat today that global risks would have a likely impact on the U.S. economy and influence U.S. policymakers. That's something the Fed said at its last meeting in September.

While the odds have increased for a December liftoff, a lot can change in two months....

When Will the Fed Raise Interest Rates? 2016 Looks Likely

When President Eisenhower signed the interstate highway bill it was only 19 pages long. It spurred thousands of jobs across the country. A revamping of
the infrastructure to include the outdated and fragile electrical supply grids would create well over a million jobs. Companies would have to manufacture it,
companies would have to transport it, companies would have to install in and some one has to maintain it. The average citizen at this time could give a damn about water on Mars when they are fearing how to provide for their families.