On Sunday, Nov. 15, I watched the NY spot gold market closely to look for its reaction in the wake of the terrible Paris attacks.

Right at the open, the gold price shot from $1,085 to $1,090 as traders bought gold as a safe haven in reaction to concerns about geopolitical instability. But that was short-lived.

As the markets began to digest the news, stocks rallied on Monday, Nov. 16, were flat on Tuesday, rallied again on Wednesday, and moved sideways Thursday. They closed the week with a 91-point bump Friday.

By mid-day Tuesday, Nov. 17, gold sold off as the markets shrugged off the Paris attacks. It touched the $1,064.50 level momentarily, but then quickly bounced to close at $1,069.

On Wednesday, gold prices popped a little to about $1,072, post-October Fed minutes release at 2 p.m.

But it's the action in gold stocks that stole the show…

Here's a look at the comparison between spot gold and gold stocks last week: 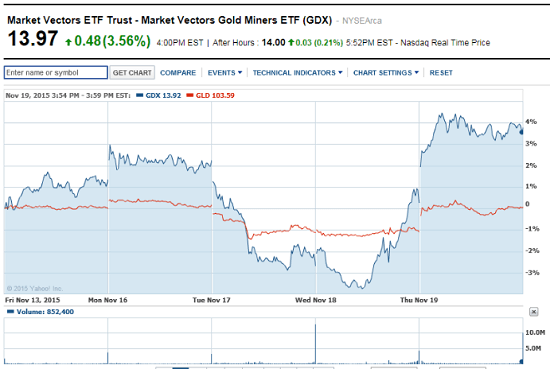 While gold was essentially flat on the week, gold stocks rose about 3.5%.

But I'd like to draw your attention to around 2 p.m. on Wednesday, Nov. 18. That's when the Fed's October minutes were released and reinforced the likeliness of a December rate hike.

To see gold bounce on that news tells me that it's the possible removal of uncertainty (as twisted as that may sound) that helped spot gold move higher. It may also be the expectation by the market that the Fed simply is unable to raise rates by much and is even less likely to keep raising them afterwards.

For their part, gold stocks zoomed, bottoming around noon on Wednesday, then dramatically reversing course. This started a couple of hours before the Fed minutes were released.

Gold stocks then bounced around, becoming a little volatile as the Fed minutes were being digested, but proceeded to surge higher as the afternoon wore on.

On Thursday, Nov. 19, spot gold gained about $11 as stocks were slightly off. Perhaps the market realized that the Fed's hands were pretty much tied. It would be unlikely to raise rates much, and even then, further increases are unlikely.

This action is likely what boosted the spot gold price. But the action from gold stocks was particularly strong.

For now, spot gold has been acting relatively strong. And there are other signs of encouragement…