Many investors are eager to invest in Blue Origin stock - especially after today's news...

Blue Origin - the private spaceflight company headed up by Amazon.com Inc. (Nasdaq: AMZN) CEO Jeff Bezos - just made history. It launched a rocket into space and then recovered the rocket completely intact in a controlled descent.

Rocket recovery has never been done before. The maneuver means massively reduced launch costs because it's a step toward ending U.S. dependence on Russia's "one-and-done" pricey, single-use rockets. 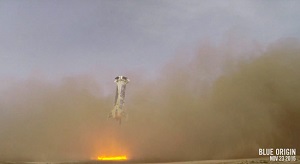 "Rockets have always been expendable. Not anymore. Now safely tucked away at our launch site in West Texas is the rarest of beasts, a used rocket," Bezos wrote in a blog post yesterday. "Blue Origin's reusable New Shepard space vehicle flew a flawless mission - soaring to 329,839 feet and then returning through 119-mph high-altitude crosswinds to make a gentle, controlled landing just four and a half feet from the center of the pad. Full reuse is a game changer, and we can't wait to fuel up and fly again."

Blue Origin did not announce yesterday's test flight in advance and did not issue a statement about it until 18 hours after it took place.

Special Report: Cannabis Is The Gold Rush of the 21st Century - 30 Stocks to Invest in Now. Read more...

Elon Musk, CEO of Tesla Inc. (Nasdaq: TSLA) and rival private spaceflight company SpaceX, congratulated Bezos on Twitter. He also correctly pointed out that achieving reusable rockets for orbit - a longstanding goal of SpaceX's - is many times more difficult than doing so for a suborbital flight, as Blue Origin has just done.

Even though Blue Origin's rocket is suborbital - and therefore not powerful enough to put people into orbit - it's still an extraordinary achievement.

"This flight validates our vehicle architecture and design," Bezos wrote.

New Shepard is also designed to carry people, but Blue Origin has not yet disclosed a timetable for crewed flights. However, in recent weeks, company officials stated they plan to begin unmanned test flights before the end of 2015. Additionally, Blue Origin is on track to begin commercial flights carrying research payloads in mid-2016.

That all points toward a bright future for Blue Origin - but can investors take advantage?

Historical day for space flight. Another example of Jeff Bezos' pioneering spirit and his continual ability to look to the future. Everything he touches is successful, and he keeps on having success where others have failed. His vision for the future is unparalleled in his ability to achieve success in technology thought unattainable. Look forward to the future of Blue Origin and what comes next!