Today's silver price is pulling back, down about $0.20 to around $14.35, following what turned out to be a wild but positive week…

As we worked our way through the last five trading days, silver prices ended up slightly underperforming gold each day except Wednesday, and even then, not by much. On Thursday, while gold managed a moderate bounce thanks to short covering, silver couldn't muster sufficient strength to avoid hitting a six-year low.

But the standout day for the silver price ended up being Friday, a positively exciting day for any gold and/or silver watcher… 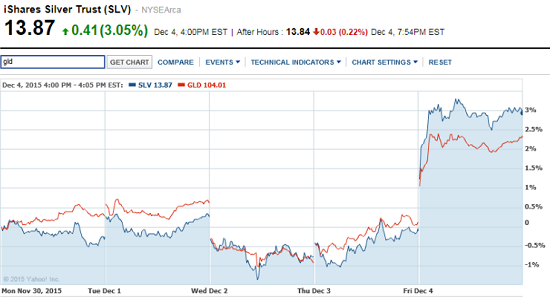 On Friday alone, the SLV ETF opened a full 1% higher and kept going up to 3% higher in a matter of 45 minutes. Of course, it was simply mimicking, as it should, the spot price for silver.

Here are some of the drivers that led to this kind of action.

U.S. Federal Reserve Chairwoman Janet Yellen had been talking up the probability of a December rate hike earlier in the week, providing the Fed's standard forward guidance (or manipulation…).

That buoyed the U.S. dollar which, of course, weighed on silver.

But on Thursday, as European Central Bank chief Mario Draghi announced that he would lower deposit rates by 0.1% and extend (but not boost) its bond-purchase program, the euro bounced due to the lack of easing expected by the market.

The dollar sold off pretty sharply, which is why gold saw a gain, but that simply didn't translate to the silver price, which hit a six-year low.

But the week, and the action, were not over yet.