There is a reason that adults are told to don their oxygen masks before assisting children in the event of an emergency on an airplane. If the most capable people are disabled, the weakest are unlikely to be able to help themselves.

The same adage applied to the U.S. economy when Barack Obama took office in January 2009. In the midst of the worst financial crisis in a century, it was imperative that everything be done to address the causes of that crisis and to strengthen the fabric of the economy to position it for sustainable economic growth. That wasn't done. Instead, the president made a historic decision that will rank among the great policy errors of the 21st century. He decided to pursue his dream of universal healthcare. 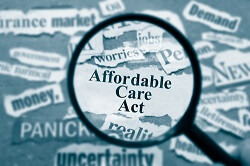 It's been an economic and political nightmare.

The result, as you might expect, is the infliction of enormous damage on the American economy and tens of millions of Americans whose medical care has been turned upside down in the name of providing another entitlement without asking anything in return of the recipients. The Affordable Care Act (known as Obamacare) has increased medical costs, deprived Americans of their chosen physicians and treatments, and contributed to a culture of dependency that has no place in a land of liberty.

The Disaster That Is Obamacare

President Obama decided to pursue healthcare reform despite opposition from a majority of the American people and a near-majority of Congress. He managed to sneak the legislation through by a bare majority using a reconciliation process designed for budget items and sold it as a phony civil rights measure. In the rush to pass the highly complex law before losing his Congressional majority, neither the president nor the vast majority of those who voted for the law read the bill or evaluated its unintended consequences.

For one thing, it unleashed an enormous merger wave, which has resulted in a series of mergers among health insurers, hospital chains, and pharmaceutical companies that were unopposed by antitrust regulators.

The law is also, predictably, a financial shambles. While the Obama administration claimed that Obamacare would be revenue neutral or save money, estimates now place the cost at close to $2 trillion (conveniently incurred after President Obama leaves office).

Eleven of the 23 regional coops formed under the law have failed. The largest health insurer in the country, UnitedHealth Group Inc. (NYSE: UNH), warned that it may withdraw from state exchanges after suffering hundreds of millions of dollars of losses. We are also learning the true costs of the law's expansion of Medicaid to the states – and they are nothing short of catastrophic. While the Obama administration thought it could conceal the true costs of the law by pushing them off until after it leaves office, the chickens are already coming home to roost.

Obamacare was designed to incentivize states to expand their Medicaid programs by offering to pay 100% of additional costs through 2016, dropping to 90% by 2020. This free money led many states to take what appeared to be a great deal, but they are learning that there are no free lunches.