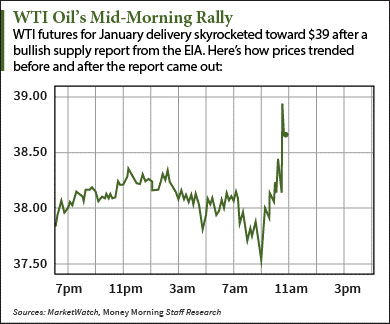 The surge in crude oil prices today came after the EIA said in its weekly report that U.S. oil inventories decreased by 3.6 million barrels last week. That makes sense considering oil refineries operated at 94.5% of capacity, up from 93.1% the week before.

Although the drop marks the first weekly decline since September, investors are skittish about supply sitting at an 80-year high of 485.9 million barrels.

"Gulf Coast refineries appeared to be cranking out a lot of product last week, helping to drive down Gulf Coast oil inventories," said Richard Hastings, macro strategist at Seaport Global Securities, to MarketWatch. "A bit of relief for the week, but pressure remains fully in place going forward."

Despite some sporadic increases, oil supply will continue to decrease in 2016. According to Money Morning Global Energy Strategist Dr. Kent Moors, the drawdown will come from a huge drop-off in well production next year.

You see, the average U.S. well produces most of its volume within its first 18 months. The majority of wells are now seeing a peak in production. That makes sense considering the oil price crash has been going on for about 18 months.

"The U.S. rig count has declined precipitously… that can't help but lead to a drop in supply, especially when it comes to shale or tight oil," Moors said. "It's called the decline curve and can't be finessed forever."

In fact, Moors just released his oil forecast that specifically shows where WTI and Brent prices will be by Q3 and Q4 2016…

Alex McGuire is an associate editor for Money Morning who writes about energy. Follow him on Twitter for all of the biggest updates on oil and gas prices.

That's such a good news to hear. A new fuel that can curb all our petroleum demand!