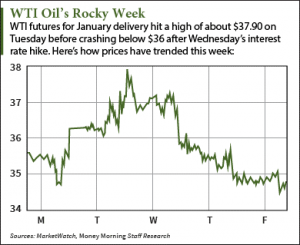 WTI crude oil prices today (Friday) were down 1.3% as the U.S. benchmark finishes out its third straight weekly loss. Crude oil prices have dropped 3.1% this week thanks to oversupply concerns and an interest rate hike from the U.S. Federal Reserve.

At 9 a.m., WTI crude oil prices today were trading at $34.50 a barrel. That marks the third session this week where prices have fallen below the critical $35 mark. They're currently down 42.5% for the year.

Today's fall is also a repercussion of the Fed's monumental decision to raise interest rates by 0.25% on Wednesday. It marked the first time in nearly 10 years the Fed raised the federal funds rate from its near-zero level.

Raising interest rates increases the value of the U.S. dollar. That lowers demand for dollar-denominated commodities like oil because they become more expensive to users of other currencies.

"Energy demand elements are emerging that far outweigh the significance of any Fed move," Moors said in September. "Because while the fixation on a rise in interest rates continues, aggregate expected global oil demand is moving up regardless."