They finally did it. The Fed finally raised rates… and the gold price didn't collapse.

I've been saying for some time that this Fed rate hike was so widely expected, it was nearly completely priced in already.

So now that the big news is behind us, we can actually analyze it, see how gold reacted, and look to what it could mean going forward, with only about six trading days left before 2016…

For nearly the past year, and certainly the past week and a half, it's been all about the Fed rate hike – which is really quite silly when you come right down to it. Because the U.S. Federal Reserve upped rates from 0.25% all the way to 0.5%. From basically zero to almost zero, with no set schedule or size of future hikes being telegraphed.

Fed Chairwoman Janet Yellen promised that it was all a moving target, with future hikes to be determined by what the data tells them about the economy and inflation… We'll see.

In any case, we do know what happened to the gold price. Here's a look at how it has behaved since the rate hike: 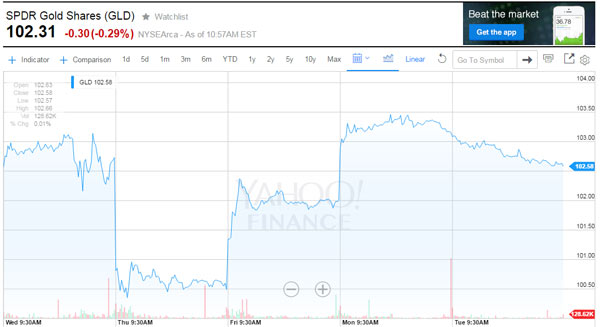 Last Wednesday the gold price rose strongly, likely in anticipation of the rate hike. Now while this might seem counterintuitive, it's likely a case of relief that the darned thing was finally going to be behind us and that, in fact, a 0.25% increase is really not all that significant. Who'd have thought?

As the details of the announcement were being digested, gold again reversed to $1,068, but soon regained $1,072, for a $7 gain on a day everyone seemed frightened would crush gold prices.

Meanwhile, the U.S. Dollar Index was rising last week before the Fed meeting. Its gains flattened on Thursday and Friday.

So despite the rate hike that so many worried would crush the gold price, it turned out to be a non-event last week.

What's more, if you look at a three-month chart of the DXY, it certainly looks like the dollar may have peaked at just over 100 earlier this month:

With this Arab Dominance, Dubai's extravegenceness, ISIS supporters will crash, good for the World. Let this change take place soon for benefit of humble poor persons of the World.