Now that the year's most anticipated financial announcement – a U.S. Federal Reserve rate hike – is history, it's time to look at what's ahead for gold prices in 2016.

Contrary to what most expected, the gold price held steady after the Fed rate hike. Is that a sign of support for gold into 2016?

After the wild gyrations in the gold price in the days before, during, and after the rate hike, we continued to see a bit more of the same.

That followed through on Wednesday, as gold worked slightly lower from $1,072 to $1,070 by day's end. Traders were seduced instead by the S&P 500, which continued its climb higher from the previous day. It gapped higher at the open, at 2,051 to close at 2,064. 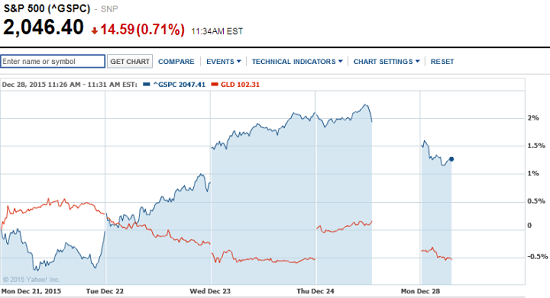 And here's what the action looked like in the U.S. Dollar Index over the past week: