The year is wrapping up, and we're just days away from 2016.

This means it's time to think about your New Year's resolutions.

Most people give up on their resolutions within the first few months of the new year.

As a matter of fact, according to a recently published article by Forbes, only 8% of people actually achieve their New Year's goals.

The other 92% of people fail because they set too many goals that are too complex and too unrealistic to achieve.

So I'm going to give you the only New Year's resolution you need:

And today, I'm going to show you the secret to reaching that goal...

Now, we've recently been talking about momentum indicators. I showed you how MACD can measure the strength and duration of a trend and how you can use stochastics to time your options trades.

Both of these are terrific tools for showing you the direction a stock's price is heading.

But right now, I'm going to show you the absolute best momentum indicator you can have in your trader's toolbox...

And how you can use it to help you kick your profits into high gear in 2016. 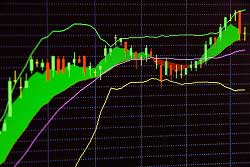 Stock and options traders will often try to tell you that picking the absolute top and bottom of a trend is a very difficult thing to do - at least consistently.

But as I've said before, anyone who tells you that he or she found the absolute top or bottom of a stock is not being honest with you.

So the focus for today isn't on trading absolute tops and bottoms.

Instead, I am going to talk to you about another a technical indicator that measures the points in a trend of a stock that signal where the battle between the bulls and the bears may be reaching a turning point.

It's similar to what I recently showed you - MACD and stochastics - in that it's a momentum indicator used to assess oversold and overbought zones. Remember that momentum is the rate of the rise or fall in the price of the stock.

It compares recent gains to recent losses, and to what extent they are, in an attempt to find out if the stock is in an oversold or overbought condition.

RSI is critical for traders to know in order to determine the best income-producing trades based on these gains and losses.

It's a means for a technical trader to find a point in the trend that may be an ideal setup for an income-producing trade idea.

Like MACD and stochastics, RSI is a momentum oscillator that's best used in sideways trends...