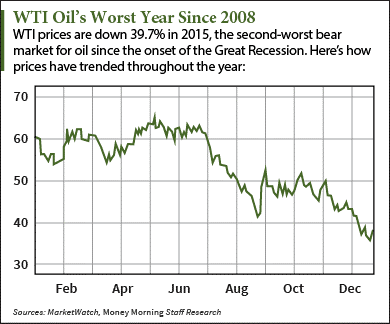 Brent crude oil prices also dropped this afternoon. The global price benchmark fell 3.3% to $36.96 a barrel. That marks the first time all week Brent has traded at a premium to WTI. Brent prices have plunged 19.2% this month and 45.1% this year.

Why WTI Crude Oil Prices Are Down Today

The surprising increase was caused by a mild uptick in production. According to the EIA report, daily U.S. output increased by 23,000 barrels last week to a total of 9.2 million barrels.

"Production is up again, it's defying all odds," Dominick Chirichella, analyst at the Energy Management Institute, told The Wall Street Journal. "We still just have a robust amount of supply."

U.S. inventory levels have been at an 80-year high for most of the year. Consistent oversupply concerns – along with the U.S. Federal Reserve's interest rate hike on Dec. 16 – have pushed prices lower and lower over the last month.

But despite record supply levels, there has been a clear contraction in U.S. oil operations. According to Money Morning Global Energy Strategist Dr. Kent Moors, this is the least understood event of the past year.

And there are three factors that explain how this phenomenon is setting up U.S. producers for a more profitable year in 2016…