I recently debunked the seven greatest options myths, including one of the most popular ones: options are too risky and you can lose ALL of your money trading them.

Now that one was easy to disprove with one simple and indisputable fact: options were originally created to help mitigate risk.

But there's something else that I've been seeing and hearing that is particularly troubling...

And it's something that's more dangerous and disturbing than the options trading falsehoods we discussed last week.

What's even more alarming is that, after the chaos that unfolded in the markets last week, traders may actually believe it.

But before you make the WORST decision of your trading career...

Take five minutes and read this. 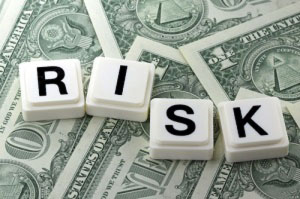 "You can trade options naked, but never trade naked options."

And today, I'm echoing his words because I am seeing far too many publications that are campaigning for the riskiest strategy in the options world: trading naked options (this is also known as shorting options).

The idea of trading naked options is something that I'm not a fan of at all... even when considering it as a day trade.

In fact, I will NEVER publish a trade that involves naked options.

But it's important that we talk about them today because as I've said countless times before, making money is my No. 1 goal - and there is a right way and a wrong way of doing it.

And trading naked options, folks, falls under the "wrong way."

The right way to make money trading options is using safe and effective strategies. This means using strategies that have either minimal risk accompanied by higher than average success rates or ones that have favorable risk to reward ratios (or both).

And selling naked options is neither safe nor effective.

Let's start with the basics to understand why...

Remember that an option is an agreement between you and the markets. When you sell an option "naked," it means that you don't actually own the underlying security (the stock). This is also commonly referred to as shorting stock.

When you sell a naked put, you are selling to the markets the right to sell a stock (or "put the stock to you") at a specific price. Remember that a put is the right, not the obligation, to sell (or "write").

So when you sell an option naked, this means that you do not actually own the stock but are willing to have it sold to you at the strike price for which it sold.

So why sell naked options?

You may hear that, though risky, trading naked options is a means to an unlimited profit potential. And proponents of this strategy may say that it's a great way to profit off of the stock you wanted in the first place.

Now this may be technically true in that you take in the amount of the premium when you sell it and reduce the basis of the stock when you're forced to buy it...

But you may ultimately be risking much more than you anticipated, despite the amount of the premium that you took in.

Advocates of this strategy will also say that selling naked options is cheaper and therefore less risky. However, this actually causes beginner traders to sell more option contracts than they should... increasing their total risk levels. 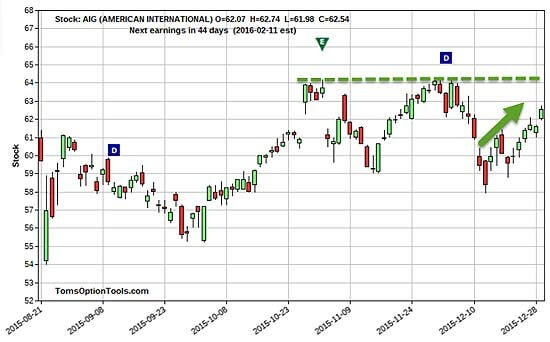 Let's say a trader wanted to sell a naked put on AIG (expecting the price to move another two points higher) so that he or she can then buy back the put and pocket the difference.

As you can see, what happened to AIG wasn't great... 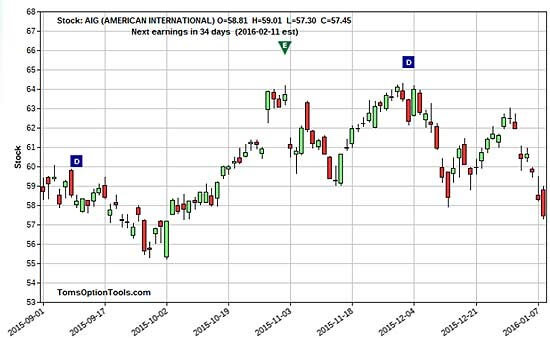 As a result of selling naked put options, the trader was forced into buying shares of AIG at $62. But this means that the seller would then own a stock that is at $57.50... which results in a loss of $4.50 per share.

Now if the trader were to buy the option back to close the obligation (as the seller of the option), the contract that was sold for $0.81 would now need to be bought at the current price of $4.60... netting a loss of $3.79.

So you can see in this example that the trader's reward expectation ultimately resulted in an even greater loss.

If that seems scary, then just wait...

This Is the Best Option for Limited Reward... and Unlimited Risk

Let's see what can happen to the naked call seller...

But remember that as a naked call seller, the trader does not actually own the stock to give if the markets exercise the right to buy that stock (or call the stock away from the trader). This means that the trader would then need to buy the stock in the open market at the current market price to replace the $50.

So the unlimited risk here lies in the fact that the stock can go up indefinitely. And I would go even further by saying that the price risk on the stock remains unlimited until the expiration date.

Now, if some favorable news is announced on the stock and boosts the price higher... to the tune of $60 per share... and the call gets exercised, then the trader still takes in a loss of $10 on the stock.

And even with the premium of $1.00, the loss is nine times that of the premium (a loss of $10 on the stock price offset by $1 for selling the call equals a loss of $9 per share).

So in conclusion, and as you can see from the examples above, you're setting yourself up to take on unlimited risk as a naked options trader.

And this is exactly what I'm trying to protect you from.

Instead of selling naked options, consider spreads as a better alternative... especially if the cost of buying calls or puts exceeds your risk level.

A spread is created when one option with one strike price is sold to generate a premium while another option at a different strike price is bought to act as a hedge against the option that was sold. Both of these options are to be done simultaneously on the same order ticket, which constitutes one trade.

So steer clear of naked options... unless, of course, you're comfortable taking on unlimited risk...

These 26 stocks have a 90% chance of going up in price in January... A revolutionary, patent-pending tool locates stocks that have 90% to 100% probability of going up in price (based on a decade of historical data). Thousands of people are now learning how to get rich from this each week, and now, you can too. Find out more here.

Bummed…
I joined ready to learn the craft and sciences of trading.
I was given solid information from a renowned energy expert. He included concise directions on executing a beautiful trade… but because I'm not experienced enough in trading, the online brokerages will not allow me to follow through with it.
Not to be deterred, I have spent several days trying to emulate a "strangle" using only the level one trading resources I'm allowed. Is emulating a strangle possible somehow using some mixture of the simple, low-end trading options?
Thanks. Lisa