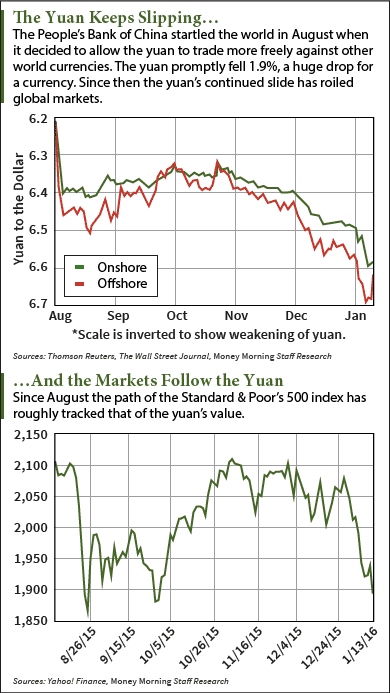 Investors no doubt remember what happened in August, when China's central bank took the world by surprise when it announced it would allow the yuan to trade more freely. The yuan immediately plummeted 1.9% against the U.S. dollar and sliced nearly 1% from the Standard & Poor's 500 Index, while the Dow Jones Industrial Average plunged 212 points.

The link between the China yuan devaluation and the drop in U.S. stocks was obvious then. But while less apparent on a day-to-day basis, the drag of the yuan devaluation on the markets has continued ever since.

After a slight rebound in the fall, the yuan resumed its decline against the U.S. dollar in November, and has become more pronounced since the start of 2016. Stocks followed the yuan's rebound higher until November. Then the markets got choppy through December. The 7% decline in the S&P 500 since Jan. 1 mirrors an acceleration in the yuan devaluation over that same timespan.

But why is this happening? Why should the markets care about the yuan devaluation?

Why the China Yuan Devaluation Matters

It's because the world's markets see the yuan as a barometer for the health of the Chinese economy. That the People's Bank of China (PBOC) has been willing over the past six months to allow steady yuan devaluation sends a signal to the world that the Chinese economy may be weaker than feared.

And a weak Chinese economy is a problem because China is now the No. 2 economy in the world behind the United States. Problems in China ripple out across the markets in all directions.

Here's what happens when the Chinese economy falters...

Stocks feel the pain because a weaker Chinese economy means weaker demand for goods sold by U.S. multinationals. Many of these multinationals, such as Apple Inc. (Nasdaq: AAPL), McDonald's Corp. (NYSE: MCD), and Caterpillar Inc. (NYSE: CAT), have large business operations in China.

Worries about what's going on with China's economy started about a year before the August yuan devaluation shock, but the currency's steady move downward has greatly amplified those concerns.

And many economists expect the slide to continue in 2016. A new Reuters poll of hundreds of economists named a weakening Chinese economy as their No. 1 concern for the new year. Their average forecast for China's 2016 growth is just 6.5%.

This would be disruptive enough if the PBOC was guiding the yuan down in a consistent way. But from time to time the Chinese central bank appears like it's trying to prop up the yuan rather than letting the market dictate the pace of the decline.

That includes using hundreds of billions worth of its foreign reserves to support the yuan and slow the decline.

The PBOC has also been inconsistent with how it sets the daily "fix" of the yuan. Each morning the PBOC sets the yuan's rate; it is only allowed to trade 2% above or below that rate. Sometimes the PBOC appears willing to allow yuan devaluation, and sometimes it sets the rate higher in an apparent attempt to support it.

Those mixed signals on the China yuan devaluation have created uncertainty in the markets that has added to the selling pressure on the global markets.

And that means the global markets will stay under pressure for the foreseeable future.

"The mainstream financial media is in denial about China's economy. Talk about how China is going to grow at 6% or 7% is ridiculous. The country's economy is probably shrinking," Lewitt said.

If Lewitt's suspicions are true, things could get very ugly for the yuan - and consequently for the global markets - in 2016.

"Sooner or later markets get religion and sins get punished. That time is now. That means investors should get religion before they end up meeting the devil in person," Lewitt said.

The Bottom Line: Stock market declines in the United States over the past six months or so are linked to the pattern of yuan devaluation. The markets have interpreted the steady yuan devaluation as a sign of a weakening Chinese economy - and the markets are right. The more the Chinese central bank struggles to control the situation, the more clear it becomes the situation is worse than many imagine. The China story has some dark chapters ahead, with dire consequences for the markets.

A Tempest in the South China Sea: While getting little attention in the mainstream media, China's territory grab in the South China Sea is making many of its Asian neighbors uneasy and is a direct threat to U.S. influence in the region. Here's an overview of what's been happening, and how it could impact the markets...