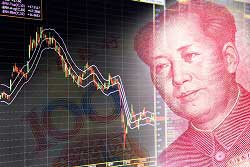 The Shanghai Composite Index ended Friday at 2,900.97. It was the benchmark's lowest close since Dec. 8.

The three major U.S. benchmarks all lost more than 2.5% right after the opening bell.

Escalating concerns about a slowdown in China, the world's No. 2 economy, a weakening currency, and chaos in its stock markets continue to rattle investors worldwide.

What's Next for the Chinese Stock Market

The latest plummet in the Chinese stock market came after state-run media reported that some Chinese banks were no longer accepting stocks as collateral for loans. Government data also showed weak demand for bank loans.

China's new bank loans came in lower than expected in December. Lenders sharply curbed activity at the end of the year as economic growth slowed and debt climbed.

Chinese banks issued 597.8 billion yuan ($90.7 billion) of new loans in December, below forecasts for 700 billion yuan. The figure was down substantially from 708.9 billion yuan in November.

Analysts say the slowdown is likely linked to an accumulation of bad debt on Chinese lenders' books, which threatens their asset quality and chips away at profitability. And that is creating a major ripple effect through global markets…

Bad loans at China's commercial banks have risen for four consecutive years. At the end of September, the bad loan tally stood at 1.19 trillion yuan, up from 842.6 billion yuan year over year.

China's central bank maintains that the nation's money supply shows ample liquidity in the economy. But economists warn that Beijing may need to implement further monetary measures to boost and bolster its economy, which has seen amplified capital outflows this year.

The Asian nation is expected to report its slowest growth in a quarter of a century for 2015 when figures are released next Tuesday. More dismal data will undoubtedly push the Chinese stock market even lower.

As we've seen this week, the Chinese stock market turmoil is having a major impact on the U.S. markets. And while the economic signs are troubling, there is a clear way for investors to protect their money from a potential stock market crash now…

So the Chinese liar(s) all are down in the dumps about their Stock Market fueled lies biting them in the behind? Oh too bad that liars always lose in the end! Don't buy anything Chinese! Junk used to come from Japan but that changed and now the junk comes from China!