There's no end in sight for the energy market's struggles. West Texas Intermediate crude is down 26% in the last 12 months alone. Natural gas is off 19% over the same period.

But at the intersection of energy and metals, there's some incredibly bullish momentum right now. It's forming underneath a critical "energy metal" that's already 28% above its mid-2015 lows.

This metal has quietly been on a healthy climb since July, but thanks to two extremely bullish developments, its "stealth" climb could get a whole lot louder.

And with one easy play, we'll be positioned to collect from this metal's ride higher…

Why Uranium Will Continue to Outperform the Market

The visit was a success for everyone – especially investors – as Modi and the Canadian side inked a five-year, 3,000-metric-ton deal that would see Indian nuclear reactors supplied with Canadian uranium. The deal was worth C$350 million ($240 million).

At the time I predicted that this would give impetus to higher uranium prices, and that's certainly come true, but there's an even bigger catalyst unfolding in Asia right now.

In September 2015, I told you how China's "New Silk Road" megaproject could provide almost boundless opportunities for investors.

It's the largest modern megaproject ever attempted, and a major component of it includes investment by China's $40 billion related infrastructure fund.

Now Reuters has reported that CGN Mining Co. Ltd., a subsidiary of China General Nuclear Power Corp., will be assuming a minority stake in uranium deposits in Kazakhstan. Keep in mind that the Kazakh uranium industry overtook Canada's to be the world's largest back in 2009.

While this foreign investment is impressive, it doesn't end there…

The landmark agreement will also include the building of a fuel assembly production plant. And here's the kicker: All of the resulting fuel supply will be headed straight back to power China's nuclear reactors. 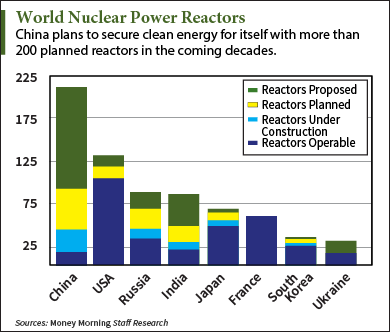 According to Reuters, Zhang Huazhu, chairman of the China Nuclear Energy Association, said, "We've approved two new projects this year [2015] and there will probably be another two or three approved later this year, so I believe that normality in the sector has already been restored."

(By "normality," Zhang is referring to the disruption caused to the nuclear power industry by Japan's Fukushima disaster.)

Besides China's existing 26 reactors, the country is building 23 more – and it's aiming for an additional 172 reactors.

What's more, President Obama is supportive of a 30-year deal that, according to The Washington Post, "…would allow Beijing to buy more U.S.-designed reactors and pursue a facility or the technology to reprocess plutonium from spent fuel."

Of course China is anxious to secure a source of energy to power its rapidly growing fleet of reactors.

The recent Paris agreement to reduce greenhouse gases may lack mechanisms to press participants to take concrete action, but major polluter China is already self-motivated enough to clean up its own environment.

That's why China has committed to constructing an average of seven nuclear power plants annually through 2020. Its neighbor, India, has plans to produce a full quarter of its electricity from nuclear power by 2050, a massive increase over the 4% level it had in 2013.

Since then, stockpiles of uranium have been cut almost in half as the United States-Russia Highly Enriched Uranium Purchase Agreement, popularly known as "Megatons to Megawatts," ended in December 2013.

So it's going to be increasingly challenging for uranium mining output to compensate for diminishing stockpiles, as low prices have discouraged the development of new projects.

Well, here's where it gets interesting…

As restricted and controlled as uranium may be, for obvious reasons, there is still a liquid, easy way that you can play this compelling energy metal.

Uranium Participation Corp. (TSE: U) is an indirect way to own uranium. Substantially all of the exchange-traded fund's (ETF) assets are invested in uranium oxide concentrates, like triuranium octoxide (U3O8) and uranium hexafluoride (UF6). U3O8 is a more basic, unrefined uranium, whereas UF6 is an intermediate-stage product before converting to nuclear fuel.

The main objective of this investment vehicle is to seek unit value appreciation through increases in the uranium price.

Since Uranium Participation effectively works like a closed-end fund, its shares can trade at a premium or a discount to its net asset value (NAV). And that often depends on current market sentiment.

Since "the crowd" is typically late to the party, there's an interesting opportunity presenting itself.

As the "the crowd" eventually gets wise to the outright bullish fundamental prospects for uranium, the current discount will likely turn into a premium on top of gains from a rising spot price in the metal.

Remember that uranium supplies clean baseload power at low cost to billions around the world, and more and more people use it each year.

Higher prices are coming as demand starts to overtake supply. Your chance to profit is now.

Uranium is going to be a critical part of the global "energy matrix" from now on, but it won't be the only one. In fact, Global Energy Strategist Dr. Kent Moors is reporting on an energy discovery that's unlocked a 36,000-year supply of energy. This energy is endless, it's ready to use immediately, and it's got OPEC and Big Oil on the ropes. Every major energy player on the planet is moving in – including the U.S. Department of Defense, which just invested $7 billion – in the hope of getting in on the "ground floor" of this early-stage energy boom. Click here to find out exactly how to play this new development.

Thanks so much for your article and suggestion about a Canadian stock. It is easier for me to buy in C$…….

This sounds like a great play bit what are the effects of the currency and how do we offset currency risk….or is it really not something to be concerned about?

The price of Uranium Participation Corp has been flat since 2011. But that's better than the shares of the related mining stocks, which have been mostly in a downtrend that whole time. But the mining stocks will probably have higher percentage gains once the uranium market really turns upward.

I'd like to buy "U" but cannot locate it in Fidelity. Apparently it's not available as an over-the-counter trade?