Editor's Note: Normally, only Bill's paid-up Private Briefing subscribers would have access to this interview, but we've spotted some potentially lucrative new developments in Bitcoin, the digital currency, and we wanted to give all our Members the chance to participate in this. Here's Bill...

Bitcoin is a lot more than a digital currency. It's one of the most fascinating and disruptive products available to you today.

Bitcoin is decentralized, so it's immune to interference from the world's central banks and highly resistant to politics. It's secure, too, using robust cryptography to maintain security and anonymity and, paradoxically, total transparency.

That decentralization, along with its limited supply, give Bitcoin a built-in value - and a mighty high one, at that. There will only ever be 21 million Bitcoin in existence, a milestone we're expected to hit in the year 2140. Unlike dollars or euro, bankers can't just print more to devalue it.

On the other side of the equation, demand for Bitcoin is surging with a momentum all its own. You see, it's become a bona fide asset class: Bitcoin owners can spend it in more places, on everything from a ride to space on Virgin Galactic to a pepperoni pizza. There are Bitcoin stocks, exchange-traded funds, and even derivatives available to investors, too, as you'll see shortly.

But what's even more exciting is the profit potential, both in Bitcoin and the "blockchain" technology that makes it work securely, for investors who play it correctly.

So I jumped at the chance to sit down with Dave Zeiler, a former Bitcoin "miner" and recognized expert. Miners are expert insiders, the closest Bitcoin will ever come to having bankers. They help oversee and execute the truly massive number-crunching needed to generate Bitcoin in very small increments - up to that 21 million mark, of course.

Now, Bitcoin owners have already seen gains of more than 1,000% - several times, in fact. But as you'll have the chance to see, that's just a bit of what's in store...

A One-on-One Interview with a Bitcoin Expert 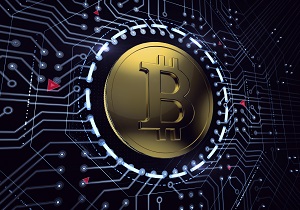 William Patalon III: Dave, it's been a wild couple of years for Bitcoin. And as one of the early miners - indeed, a guy who operated back in an era when individuals could still "mine" the cryptocurrency in time frames short enough and quantities big enough to be meaningful - you bring the insight of a practitioner. And as one of the top Bitcoin writers in the country, if not the world, you also bring the insight of an analyst, expert and observer.

I mention this because I want folks reading this to understand what an opportunity this is for them to hear about a cutting-edge tech trend... directly from a person who truly has something to say.

In other words, Dave, I want folks to understand your bona fides before we started. And because I'm intending this to be a Q&A that gives newcomers an entry into this realm - as well as one that gives even experts a depth of insight they'll find valuable - let's start with a quick overview... with the basics.

What is Bitcoin? Why is it important - and why is it viewed as equal parts currency and technology?

David Zeiler: (laughing) That's a mouthful right there, Bill. Bitcoin - at its most basic level - is a digital currency. That is, it exists only on the Internet and not in the physical form most people think of as "money" - you know, paper bills and coins. If that seems odd, think about how much of your money you actually see in physical form. Today, most of us who earn a paycheck have direct deposit. We pay for things electronically with credit cards and debit cards. So Bitcoin is a logical extension of that trend.

WP: Okay, so we can see why it's been dubbed as a "cryptocurrency." Let's drill down a bit. What is the "blockchain"?

The blockchain is an Internet-based public ledger of every Bitcoin transaction. People who run the Bitcoin software maintain an up-to-date copy of the blockchain on their computers. I run a Bitcoin "node" myself, as a matter of fact. This system is what makes Bitcoin trusted - each transaction, in addition to being public, is verified by the "nodes" on the network.

The "cryptocurrency" aspect comes from the very high level of encryption that protects the transactions and the mining of new Bitcoins.

WP: Okay, so we have a basic understanding of Bitcoin itself.

Here's what I would like to do: Let's divide our talk here today into four parts: The technology... the economics (including pricing)... the investments... and the future.

WP: We'll get into the technology in a moment. And the investment angle. Let's first talk about the economics of Bitcoin. Including how these are "created."

Bitcoins are "mined." What does that mean? And what are its economics? There's a limit to how many of these can be made, right? How does that fact affect its pricing - indeed, the entire economics of this cryptocurrency?

DZ: The term "Bitcoin mining" is an analogy to the traditional mining of precious metals like gold and silver. But instead of digging in the ground, Bitcoin miners use powerful computers to compete against each other to be the first to solve a complex math riddle. The winner is awarded a batch of Bitcoins. At first, the reward was 50 bitcoins per block solved. That got cut in half in 2012 to 25. This summer, the reward will be halved again, to 12.5.

As for supply, the software is programmed to stop the creation of new Bitcoins at 21 million, projected to occur in the year 2140. But most of the Bitcoins that will ever exist will be mined by 2025. Right now, the total is about 15 million. This declining rate of new supply is intentionally deflationary. It's designed to prevent the kind of devaluation we see happening with the world's fiat currencies, such as the U.S. dollar.

WP: In terms of mining, how does the mining landscape today differ from the one you were playing in back during your Bitcoin-mining days?

DZ: I discovered Bitcoin - for myself - back in 2011. Back then, you could reasonably mine Bitcoin - become the equivalent of a Bitcoin "wildcatter" - by spending $300 for a souped-up computer graphics card. It was a special card... and I used that revved-up PC to "mine" Bitcoin, running it 24/7. I only exited after building my "stake," watching as the influx of new miners crowded out the individual players and, finally, facing equipment failures.

WP: And that's when you shifted your focus - and transitioned to a Bitcoin analyst/journalist/chronicler.

DZ: That's right, Bill. I mean, how could you not be entranced by a development this dramatic? As you know, years ago I was an avid chronicler of Apple Inc. This was years ago... before the iPhone... before the iPad... when even the iPod was a novelty.

WP: As I recall, Dave, you ran an Apple-focused news site that was one of the most frequented, watched, and heralded in the business - so much so, in fact, that Apple itself paid quite a bit of attention to what you wrote and said.

DZ: It's kind of you to remember that, Bill. And I only mention my running of that Apple site because that feeling - of being at the launching point of something big and meaningful and paradigm-shifting, which is precisely how I felt about Apple back then - well, that's exactly how I felt about Bitcoin when I made that transition from solo miner to chronicler. I knew Bitcoin represented a historic innovation... invention. And I've followed it closely ever since.

DZ: So now we're in late 2012 - and at the start of 2013. So as more miners jumped on the Bitcoin bandwagon, especially in 2013 when the media started talking about it, and the Bitcoin software raised the difficulty of the math riddles. The software aims to create one Bitcoin block every 10 minutes. The more computing power - "hashing power" in Bitcoin-speak - the higher the difficulty must go to maintain a steady rate of block (and Bitcoin) creation. Not surprisingly, Bitcoin mining quickly became an "arms race." Companies started building special machines called ASICs dedicated just to Bitcoin mining. ASIC stands for application-specific integrated circuit. They're both powerful and expensive, often costing thousands of dollars. That has pretty much pushed the "little guys" like me out of mining. 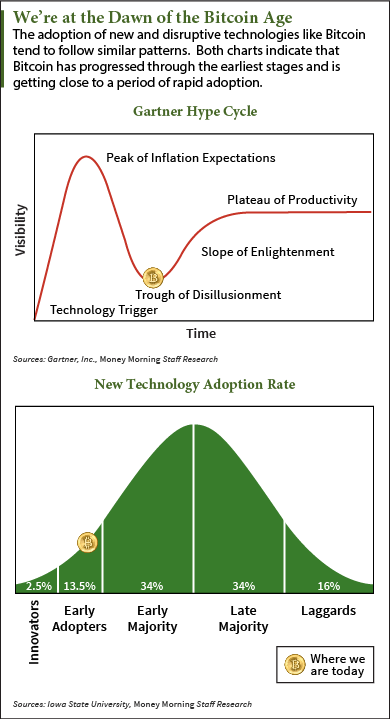 WP: What's the forecast for Bitcoin for this year? What's the consensus? What do YOU see happening, Dave? And what's behind your forecast?

DZ: Like other investments, the Bitcoin price is the result of supply and demand as well as market sentiment, which is driven by the media coverage. One key event in 2016 is the halving of the blockchain reward, which is expected in July. That cuts supply of new Bitcoins in half and is bound to push the price higher.

On the demand side, it's not just startups looking to use Bitcoin and the blockchain technology, but major financial institutions. Bitcoin's popularity in China continues to grow. Plus, Bitcoin's reputation in the media is slowly being rehabilitated. Taken together, these catalysts will drive price increases past even the highs of the 2013 bubble. There are many forecasts out there. But I think we could easily see Bitcoin at $1,500 to $2,000 before 2016 is over.

DZ: I didn't actually run the number, but that sounds about right.

To continue reading, log in to Bill's Private Briefing on the upper right side of this page, or click here to learn how to subscribe. You'll get the rest of the interview, of course, including the best Bitcoin investments and how to buy them. And you'll receive Private Briefing in your inbox every morning - before the markets open - so you can use our best investment ideas and profit recommendations to make money each day.

Sounds interesting and could be very lucritive …

Hi there guys well I'm not that really up with bitcoin but because of the current real estate crash that I think isn't far away what would be the best way to get/invest in bitcoin!!

Learning about investing is a hobby for me. Thanks for your input.