The U.S. Federal Reserve kicked off its two-day policy meeting Tuesday, and investors are looking for any sign of the next Fed interest rate hike.

The overwhelming consensus now is that we won't see a Fed interest rate hike at the conclusion of the U.S. central bank's meeting on Wednesday.

But that doesn't mean we won't see another Fed rate hike sometime in 2016...

Among the 102 analysts surveyed by Bloomberg, none expect the Federal Reserve to raise interest rates from a range of 0.25% to 0.5% this week. One analyst does predict a change to the benchmark rate, but it's for a cut back to the near-zero level from before the December meeting. 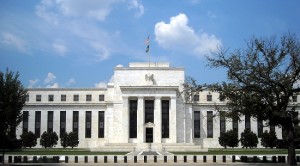 The Fed raised benchmark interest rates following the December FOMC meeting for the first time in nearly a decade. Markets applauded the news as a sign the U.S. economy was strong enough to handle a hike.

Focus then shifted to when the second Fed interest rate hike would occur. In its December statement, the Fed said it had penciled in four hikes during 2016.

The market-implied probability the Fed will lift its main rate at or before its June meeting has fallen to 44%. That's down from about 75% at the end of last year, according to futures data compiled by Bloomberg. The market says there's a 53.2% likelihood the next rate hike comes in September.

While no rate action from the Fed is expected this week, committee members have an opportunity to calm jittery markets with their policy statement. There will be no news briefing or updated economic and interest rate forecasts.

Still, investors will scour every word of the Fed's statement. And these will be the most important things to watch for Wednesday...

Don't Expect a Fed Interest Rate Hike, but Watch for This

Investors should also look for any comment on whether the U.S. economy can tolerate the rout we've seen in global markets.

China's stock markets are in free fall, down 47% from their June peak. And European Central Bank President Mario Draghi said last week the bank would "review and possibly reconsider" monetary policy at its next meeting in March. Draghi said there would be "no limits" to action to inflate the Eurozone.

But the U.S. unemployment rate is at 5%, a level many deem full employment. Plunging oil prices, meanwhile, are putting more disposable income in Americans' wallets.

In December, the Fed said it expects to gradually increase interest rates based on the health of the U.S. economy. But the stock market has been incredibly volatile since, with the Dow Jones falling nearly 8% in 2016 alone. The S&P 500 has lost 8.5% since the Fed raised borrowing costs last month.

Stay tuned to Money Morning for more updates on this week's FOMC meeting and the Fed interest rate hike decision.