4:30 PM Update: MSFT stock jumped as much as 8% in after-hours trading following a strong beat on is Q2 earnings. 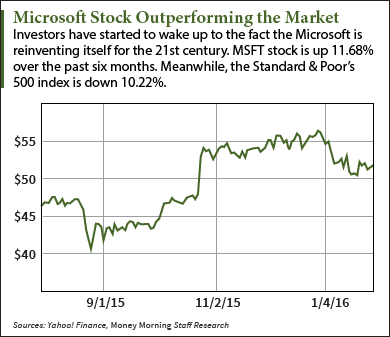 The Microsoft earnings for the December quarter were $0.78 a share, easily beating the consensus forecast for $0.71. Revenue was $25.7 billion, just edging expectations for sales of $25.26 billion.

Better still, the strong EPS number represents an almost 10% increase in profits from the same period a year ago, although revenue was slightly lower than last year’s $26.4 billion.

The results show that Microsoft is succeeding in its transition away from its weakening PC-based business to new areas of growth.

That helped offset the 5% decline in revenue from selling Windows licenses to PC makers.

Some of other Microsoft’s smaller businesses also did well, with Surface revenue up 29% to $1.35 billion and revenue from search advertising up 21%.

MSFT stock was edging up today (Thursday) in anticipation of good news when the company reports earnings after the market close.

But unless Microsoft Corp. (Nasdaq: MSFT) has a really nasty surprise in store, it's a buy even if it doesn't post a strong beat.

Over the past two years, Microsoft has worked hard on its transition away from its legacy PC business to capitalize on two major areas of growth. That strategy will continue to pay off for MSFT stock in 2016 and beyond.

Wall Street has forecast earnings per share (EPS) of $0.71 on revenue of $25.263 billion. That EPS number would match exactly what Microsoft earned in the same quarter a year ago. The revenue forecast is slightly lower than last year's $26.4 billion.

But Bernstein Research has predicted Microsoft will post earnings of $0.73 a share on revenue of $25.75 billion, which has raised hopes on Wall Street for an earnings beat.

"This is a stock that Wall Street wrote off just two years ago, but is now set to have a great 2016," Robinson said.

He's bullish on Microsoft long term because of how the company has pivoted into two huge businesses that figure to deliver growth and future profits.

These are the two mighty tech trends that Microsoft has targeted – trends that will not only enrich Microsoft, but those who own MSFT stock as well…

Why MSFT Stock Is a Buy Now

The first trend is the cloud – the hosting of data and applications at remote locations and delivering them to clients over the Internet.

The cloud segment is expected to have compound annual growth of 30% through 2020, until it grows into a $270 billion market.

And Microsoft's Azure cloud business is taking off.

"Over the past seven quarters, Microsoft has more than doubled its commercial cloud sales," Robinson said, to a run rate of $6.3 billion.

"And [CEO Satya] Nadella keeps upping the ante. He's looking for a sales run rate of $20 billion in three years," Robinson said. With 8.7% of the cloud market, Azure is second only to Amazon.com Inc.'s (Nasdaq: AMZN) Amazon Web Services (AWS).

But that's only half the story. The other big growth market that will boost MSFT stock in 2016 is virtual/augmented reality.

"This is a market that's set to go mainstream in 2016, and the market will be huge," Robinson said. It's estimated this market will be worth $150 billion by 2020, and the augmented reality portion – the part Microsoft is aiming for – will dominate.

Augmented reality superimposes digital images on top of your physical environment – the walls, tables, chairs, and floors of the room you're in. That's what Microsoft's HoloLens does.

And Microsoft is getting very close to launch, with a developer version of the HoloLens due this year. The rival Oculus Rift is also due for a 2016 release, but is a virtual reality product that doesn't allow for interaction with the user's environment.

But what excites Robinson is that Microsoft already has a deal with the National Aeronautics and Space Administration (NASA) to adopt the HoloLens.

"NASA plans to use Project HoloLens aboard the International Space Station and in missions to Mars," Robinson said.

Tapping into either one of these trends would be good for Microsoft stock, but together they figure to turbocharge it over the next year to 18 months.

Continue here for more on the special opportunity Michael is informing subscribers about now.

Microsoft's Key Moments: The Microsoft stock history tells a tale not just of peaks and valleys, but an uncanny knack to exploit opportunities. From humble beginnings, Microsoft rose to become the most powerful tech company in the world in two short decades. But it all hinged on a handful of key events. Here's how Microsoft was able to enjoy such phenomenal success…