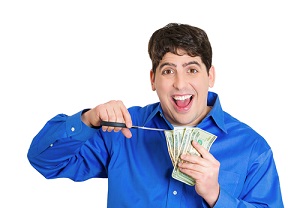 The government has found a brand-new, literally criminal use for your tax dollars.

Two years ago, the government wasted $335,000 when the Economic Development Administration decided to build 38 "speed humps" in two towns in Maine, instead of fixing the state's crumbling infrastructure.

Last year, the U.S. Department of Defense spent a laughable $40,000 building an 11-foot, historical model of Fairchild Air Force Base.

But the wasteful government spending I'm going to show you today already takes the cake for 2016, and we're only two months in...

A bill passed in the District of Columbia on Tuesday will end up costing taxpayers there nearly 10 times the salary of an average American each year.

Over the course of four years -- the lifespan of the legislation -- taxpayers will have spent what equates to...

And don't think you're immune if you're not living in the District of Columbia...

Expect to see more of this type of legislation pop up around the country as the debate over gun control rages on.

But it's not the amount of taxpayer money being spent on this new program that's the biggest outrage here.

When you see exactly who is getting your tax dollars, thanks to the bill, your blood will boil...

On Tuesday, the District of Columbia Council voted on a bill that will pay residents a stipend -- simply to obey the law.

Taxpayers in the area will now pay outrageous stipends to their fellow citizens who are identified as "criminally inclined," simply to incentivize them not to break the law.

All of it goes directly from law-abiding citizens' pockets into the hands of potential criminals for doing what is a base expectation of every society in the world: not committing violent acts.

The bill, called the Neighborhood Engagement Achieves Results Amendment Act of 2016 (NEAR Act), establishes an office that will annually identify up to 200 people who are considered "high risk" for committing violent illegal acts.

Then, the local government pays those people to participate in behavioral therapy, life planning classes, and other programs.

"The goal of the office will be to identify our teenagers and young adults at the highest risk for committing or being a victim of violent crimes, for participation in a stipend-based program involving life planning, trauma-informed therapy, and mentorship," a press release from Democratic Councilmember Kenyan McDuffie states.

McDuffie believes the program will help prevent violent crime by "creating opportunities for people," according to a letter he wrote to constituents last week.

It will cost $4.9 million over four years. The stipends alone add up to $460,000 annually, per calculations from the District's independent chief financial officer.

Ultimately, of course, it's a tab that will fall to the taxpayer.

According to the AP, Democratic Mayor Muriel Bowser has not committed to funding the program. It reports that without the mayor's support, the Council will have to find money for it through new taxes or cuts to existing programs.

This government-sponsored program is the second of its kind. The first was enacted in Richmond, Calif., in 2007. There, some would-be criminals are paid as much as $9,000 each year in taxpayer money simply to stay out of trouble.

How the Fed Killed the Housing Market: Don't believe the headlines - there is no housing recovery in the United States. In fact, the Fed's disastrous zero-interest-rate policy has all but decimated the single-family housing industry. These five charts illustrate exactly how damaging that monetary policy has been...

The current system of incarceration does not work. Why not try something to keep people out of trouble in the first place. Who knows, they may even use that money and therapy to become tax paying citizens.

Fred
Reply to  Linda B

There is a sucker born every minute. What will stop more people becoming criminals to get free money. We've tried this before with single moms leading to massive fatherless children. Human nature is born bent on selfishness so until a person can demonstrate otherwise you can't trust them. This goes for wall street con artists as well because there is no difference.

This is the Ovomit era. Come on Ted Cruz! Save us from this communist scum!

You users of the word communist have no idea what the communism is. It is the worst system in the world. But educating some people and keep them out of trouble it is a very good contribution that a civilised society can offer to his members. Investing on people is always a great business for the community.

"Then, the local government pays those people to participate in behavioral therapy, life planning classes, and other programs." It's called School. Already supported by tax dollars. If they did not get this in school, why would these classes be different? Come people we should be running Council member Kenyan McDuffie out of office ASAP.

Now that you have snakily suggested that the government is wasting the money of taxpayers, which is frightfully easy to do because human beings are at the helm, do yourself an intellectual favor by also determining how many GOOD things are likewise done across ALL the government agencies. Weigh the contrast. Too much work? Yeah, I thought so. You'd rather complain? It figures.

I fail to understand the consequences incurred if a recipient fails to stay out of trouble. Does he/she pay back the 'good do bee fee' ?

True Liberty,which this country was founded on requires that we the people hold fast to the core principles of justice and equity. No one accidentally makes right choices.
They must be taught and passed down,not traded for some cool,trendy sounding psychology and expect society to improve.

As far as DC politicians go, I guess that " STUPID IS AS STUPID DOES" sums it all up!