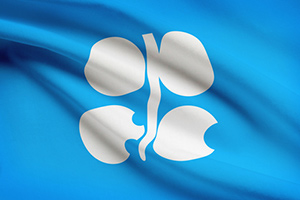 Crude oil prices today (Friday) rebounded from yesterday's 13-year lows following an announcement from one member of the Organization of the Petroleum Exporting Countries (OPEC) that the cartel will consider production cuts.

While prices were climbing after the OPEC news, Money Morning Global Energy Strategist Dr. Kent Moors - a 40-year veteran of the oil industry who has advised U.S., Russian, and Iraqi energy agencies - says there's one non-OPEC country that will have a huge influence on whether or not the cartel actually lowers output. 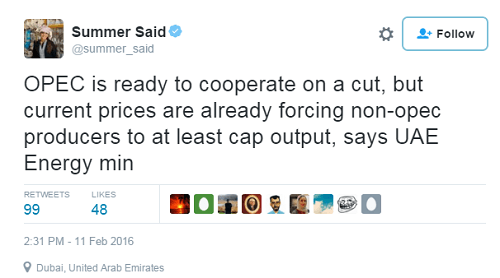 OPEC has historically been stubborn toward lowering output. At its most recent meeting in December, the cartel announced it would raise its collective production from 30 million barrels a day to 31.5 million.

But the cartel seems more desperate than ever as this year's 27% plunge in crude oil prices continues to damage many member economies.

"OPEC members like Venezuela, Nigeria, Libya, Ecuador, and Iran are experiencing significant financial constriction," Moors said back in November. "Because the cartel members are all dependent upon oil sales and run undiversified economies, the collapse in crude prices hit every one of them hard."

However, Saudi Arabia has consistently shut down other members' pleas for production cuts. Since it's the largest and most dominant OPEC member, its influence has kept the cartel's output unreasonably high for over a year now.

But Moors says there's one non-OPEC nation that can convince the Saudis to lower production and help stabilize prices...

You see, overproduction has been a huge problem across OPEC. On Jan. 19, the cartel reported total production hit 32.3 million barrels per day in December due to Indonesia's new membership. That was the highest monthly output in more than three years.

Since other OPEC countries are flooding the market with more oil, Saudi Arabia is boosting its output to maintain its revenue share.

"The convoluted rationale behind this tactic has strained credibility, but the real reason is simple: The Saudis cannot prevent other OPEC nations from raising volume in a desperate attempt to collect revenue," Moors told Money Morning readers last fall. "They need to appear to be leading the effort."

If OPEC decides to cooperate with countries outside the cartel, Russia could persuade Saudi Arabia to lower production while Russia boosts production. The Saudi's production cut would ease the tensions of the other OPEC member countries on the brink of economic collapse. It would also demonstrate Saudi Arabia's leadership abilities and efforts to improve the oil price crisis.

A decline in output from OPEC's most powerful producer would ease the glut and cause crude oil prices to bottom out. From there, they will start their long-term rebound as annual global demand increases from 93.8 million barrels a day in 2015 to 95 million in 2016.

The Bottom Line: Crude oil prices are skyrocketing today as OPEC finally considers cooperating with non-OPEC countries to ease the global supply glut. But the cartel's production quota is ultimately up to Saudi Arabia - the organization's most influential member. Since Saudi Arabia is under pressure from other economically struggling cartel members, Russia could be the key to convincing the country to reduce output. This mutual agreement between the two energy powers would restore balance to the oil market and stabilize prices in 2016.

Why Oil Prices Are About to Rise: Crude oil is set to stage a rebound, thanks to a historic $600 million signal that flashed last week. This is the largest event of its kind in history - and it clearly shows oil prices are gearing up for long-term gains...

Shut in all us wells for three months, then see if the price of oil will go up.