There's really no better way to say it: Gold is hot.

Why? Because plunging global markets have made investors jittery, nearly every day. Central banks are turning increasingly to negative rates as desperation to kick-start inflation is setting in.

A week ago the Bank of Japan surprised markets, announcing it was initiating a negative-interest-rate policy (NIRP). Then less than a week later, the Swedish Central Bank, the Riksbank, lowered its own negative rates even further.

It's looking like a perfect storm of deflation, a weak global economy, falling oil, and clueless central bankers have come together to push gold prices higher.

Can it continue? Let's take a closer look at what's going on with the price of gold…

Why Gold Prices Today Are So High 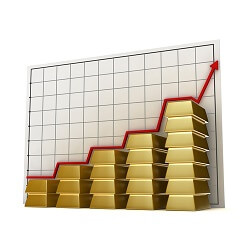 Tuesday was a yawner for gold trading. But Wednesday saw the return of safe-haven trade as the gold price moved higher once again. It closed at $1,196, as U.S. Federal Reserve Chairwoman Janet Yellen gave her first day of testimony to Congress.

Then Thursday, gold prices soared on yet more safe-haven buying as stock markets sold off around the world. Gold spiked to $1,264 by late morning, aided by further Yellen testimony. She admitted her surprise at recent U.S. dollar weakness and said it was still early to opine on the risk of a recession.

Perhaps most influential was her mention again on this second day that negative rates are a serious option for the Fed if they're judged as warranted. She told Congress that the committee is "taking a look at them again" and that it's a policy option she's keeping open.

The Fed Will Keep Gold Prices Rising in 2016

It's not hard to understand that negative rates are a central bank's way of saying paper money is worth less and now it's going to cost you to save it.

That's exactly the kind of environment where gold thrives, because the opportunity cost for owning the metal, which pays no interest, has just gone away.

This is a trend that's been gaining momentum, not losing it.

So it's not hard to imagine still more large central banks, especially those with already very low, near-zero rates, instituting the same policy. Even the Bank of Canada recently floated that trial balloon.

And the flock towards gold has been reflected around the world.

A look at these two charts pretty much says it all about the power of central banks to push gold prices higher: 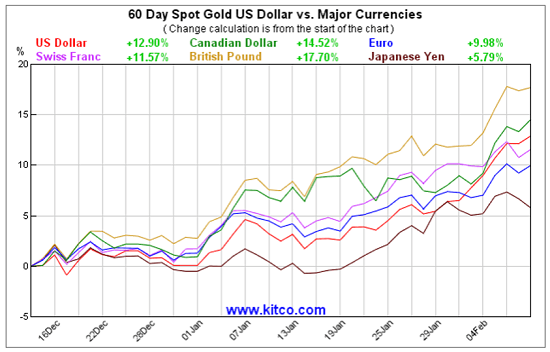 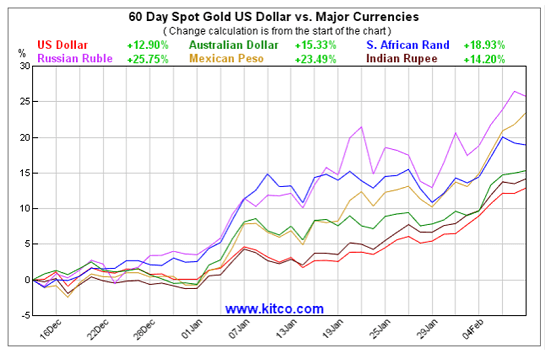 The smallest gain was in the Japanese yen at 5.79%, thanks to its recent gains against the U.S. dollar, which has been backing down. The largest gain has been in the Russian ruble, with an astounding 25.75% gain.

Even measured in U.S. dollars, gold is ahead 12.90%, and all within just the last 60 days. I think it's fair to say the way gold has zigged while the rest has zagged makes it an asset class you simply cannot ignore.

Stay informed on what's going on with gold prices today – and all investing topics – by following us on Twitter @moneymorning or liking us on Facebook.