One of the biggest stock market crash warning signs we've seen in 2016 has just come out of China. And now the Asian nation's banking sector looks like a disaster waiting to happen…

Here's exactly what that means… 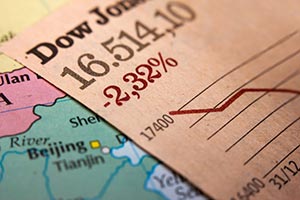 You see, China's banking sector has grown so big that if just 10% of its outstanding loans were to default, that would be equivalent to erasing about 30% of China's annual GDP, or more than $3.5 trillion.

Extraordinary credit expansions over the past 10 years have helped fund massive and frequently inefficient infrastructure to inflate China's growth. Those could ultimately result in record losses.

China is the world's second-largest economy. But growth has been waning over the last several years. Data released in January showed China's economy grew at its slowest rate in 25 years during 2015.

How China Could Cause the Next Stock Market Crash

In a letter to investors, Bass wrote that a Chinese credit crisis would cause the country's banks to incur losses 400% larger than the wallop U.S. banks endured during the subprime mortgage crisis.

Bass explained that over the last decade, China's banking system has swelled to $34.5 trillion from a base of $3 trillion.

"China's [banking] system is even more precarious when we realize that, even at the biggest banks, loans are not made to borrowers based on their ability to repay," he wrote. "Instead, loan decisions are political decisions made by the state."

"Historically, China has lost far in excess of 10% of assets during a non-performing loan cycle," he added.

And while many are fearing an imminent stock market crash, our experts have prepared a stock market crash and bear market survival guide for investors. It will help you protect your money, and even profit, when the markets begin tumbling. Get access to the full guide here.