Goldman Sachs thinks they've spotted an economic anomaly - and they're warning it may force the firm to redefine the nature of  capitalism itself.

In a research note, produced by a team of analysts and released earlier this year to clients, the firm highlights the fact that profit margins in the United States and elsewhere are historically high and that they may remain that way for a long time - especially when it comes to companies engaged in mergers, acquisitions, and stock buybacks.

In what may be the ultimate case of the pot calling the kettle black, Goldman says that's not how things are supposed to work.

I can't say I disagree.

Since 2007 we've talked about how today's markets are a completely artificial construct made possible by the Fed's incessant meddling, regulators who were asleep at the switch and who still aren't fully awake, and a completely out-of-control Wall Street machine.

You simply cannot engineer your way out of a crisis caused by too much debt by adding more debt.

Because it messes with the very relationships Goldman has evidently just latched on to.

Something has to give...

...just make sure it's not your money.

Here's how you can make sure it won't be - and a run-down on two stocks uniquely positioned to make triple-digit gains when this debt-ridden system falls apart.

S&P 500 profit margins are flirting with historically high levels, even after this quarter's blisteringly poor results and a blended earnings decline that averaged 3.7% across the board.

In fact, current profit margins are so far above their long-term average that they've "got to" fall until they come into line with longer-term averages... at least according to classic economic models. 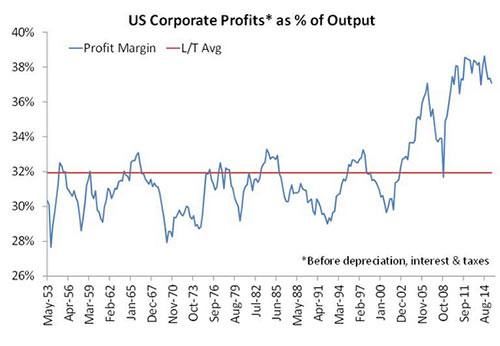 The implication, of course, is that buying growth and using debt to do it is more conducive to higher returns than investing in new plants and equipment under normal market conditions.

The irony is simply stunning.

If you read between the lines, Goldman is worried that the relationship I've just described could stay this way forever... because the markets are rigged.

Like that's a surprise, considering the role the firm has played in getting us here.

Here's where the rubber meets the road.

Goldman's concerns about the nature of capitalism are really pabulum for public consumption. I think Goldman is trying to deflect litigation and negative public opinion by creating the illusion that Goldman's in our corner, somehow fighting for what's right.

That's about as likely as race officials asking Lance Armstrong to supervise the Tour de France's next set of drug tests.

The timing is extremely suspicious, too.

It seems to me that Goldman is scrambling because their entire existence is predicated on ineffient capitalism and mispricing that they sold to others at huge profit. That they're suddenly calling for efficient capitalism is fascinating because it implies that firm has just come to terms with the fact that the financial engineering they've perfected just may be the golden egg that kills the goose that laid it... Goldman Sachs itself.

At the same time, I can't help but wonder if this isn't some sort of smoke screen based on the fact that:

A) The investing public has wised up to the firm's chicanery and,

B) that the pool of "fleecable" assets has dwindled to the point that there's very little to be gained.

Certainly, Goldman's profit margins seem to support that narrative. They've fallen by more than 60% since March 2015.

Sure, we can expect profit margins to sag in the months going forward. But that doesn't mean it's the end of the world as we know it.

In fact, there's an entire class of companies I'm following for our Money Map Report subscribers that will benefit as profit margins correct, even if Goldman is forced to "reconsider" capitalism.

Investors ask me all the time what sort of investments I recommend for uncertain times like these. And I always have a two word answer: "must-haves."

"Must-have" investments are companies making products that are tapped into trillions of dollars in spending that make them as recession-proof as possible. What's more, because they provide services that draw their demand from human nature's roots themselves, there will be a market for them, in good times and bad, for as long as civilization itself is around.

The company that sells cigarrettes and increasingly alcohol, including wines and spirits, has a sterling profit margin of 27.8%, according to Yahoo! Finance. While that's been volatile, it's never dipped below double-digit levels despite historically unprecedent conditions over the last five years.

That's an important consideration because profit margins typically fall when companies are forced to lower their prices to compete with an increasingly small pool of consumers during recessionary times.

The company has also rewarded investors with a 48% dividend hike, spread out over the last six years. It's returned more than 220% since I recommended it to Money Map Report readers - but because of the fundamentals I've described, it still has plenty of room to run.

Lockheed Martin Corp. (NYSE: LMT) is another example of a company with the staying power needed to survive the profit margin compression that's baffling Goldman. What's more, this defense contractor benefits from the $580 billion annual U.S. defense budget that our politicians are always loath to slash, no matter how dark the economic times.

History suggests that Lockheed's profit margin won't suffer too badly from a recession because its competition has already "baked in" a profit margin of 7.8%, according to Yahoo! Finance.

That might seem low after Altria's 27.8%, but keep in mind that Lockheed is playing a different game: It has all-but-assured, government-guaranteed demand for its services, and after naming its prices to be competitive with its defense contractor rivals, its margins should experience comparatively little downward pressure.

Lockheed has returned more than 150% for shareholders over the last five years, and all indications are that it will continue its run as governments ramp up their defense budgets in an increasingly dangerous world.

I can only wonder what Goldman Sachs will figure out next...

...no doubt that depends on who profits.

Keith was one of very few people who saw through the hype surrounding Twitter, Shake Shack, and GoPro, and his Total Wealth readers have cleaned up watching those stocks drop. Now he’s looking at a bullish long opportunity that could double – several times – before 2020 as the company works to conquer a debilitating injury. Click here to get Keith’s free investor briefing on this company, including the stock ticker. You’ll get his Total Wealth research, too, twice each week. There’s never a charge, either.

Altria stock topped-out at $72.00/share in 2007 according to my family account statements back then. So far, it has not fully regained its pre-crisis high. Do you see it getting back to $70.00/share anytime (soon)? Is it important to focus only on yield and not on price (history)?

Are you able to tell me the finacial state of Nedbank and other major Banks in South Africa is at present; Standard, First National, and ABSA / Barclays ?

What is the best stock to invest in right now.