As a technology investing specialist, I rarely get asked about oil prices.

But when I appeared on Closing Bell last Tuesday, that's exactly what happened.

So... instead of chatting about share-price moves in Facebook Inc. (Nasdaq: FB) or Alphabet Inc. (Nasdaq: GOOGL), I shared with CNBC's audience my views on the link between the price of oil (off more than 70% in less than two years) and the turbulent markets (down about 9% over the past year).

That said, sometimes the best conversations I have during these TV appearances happen "behind the scenes."

Today, I'll tell you about one such talk I had last Tuesday that helped me better understand where the markets are going from here.

And I'll show you why - if you're interested in that - investors need to closely observe what happens six weeks from now...

The Mind of a Top Venture Capitalist 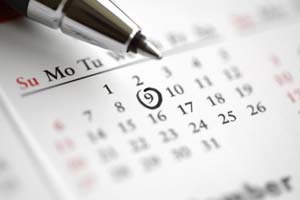 As I was preparing to go on CNBC, I talked with a new associate of mine, Venky Ganesan, a managing director at Menlo Ventures.

Ganesan confidently told me that the Silicon Valley startup scene remains as healthy as ever. And - as he pointed out - that's vital for two reasons.

First, these startups are the source of breakthrough technologies that hand investors outsize gains. Think Alphabet and Facebook. Since early 2006, GOOGL has returned 275% to investors. And since its May 2012 IPO, Facebook has handed investors profits of 175%.

Second, in the weeks ahead, we both expect to see more tech firms going public, which will bring new rounds of fresh cash into the market.

Now, oil prices and the stock market have become so closely related for a pretty simple reason.

Developing economies like China and India are growing much faster than those of the United States and Europe - and they depend on solid commodities prices to fund that growth.

Coming on the heels of Europe's stagnation and slower GDP growth in China, Wall Street basically hit the panic button, selling just about every stock and exchange-traded fund (ETF) in sight.

And tech stocks have fallen more than the overall market. Since trading began on Jan. 4, the S&P 500 was off 4.3% for the year ended Wednesday. By contrast, the tech-centric Nasdaq Composite Index is down 7.6% over the period.

However, I don't think that difference has anything to do with the role tech plays in our economy - and neither does Ganesan. Instead, it's a reflection of Wall Street's concerns about growth.

That's why the Russell 2000 Index of high-octane growth small-cap stocks is off nearly 11% over the same period.

Beyond the action happening in Silicon Valley, I count at least three other catalysts that are driving us toward a solid rebound.

Let's start with car sales. In January, the seasonally adjusted sales run rate rose to 17.55 million cars and light-duty trucks, up 5% from the year-ago period.

The good trend follows 2015, a historic year during which the industry sold nearly 17.5 million vehicles. It also came in a month when severe winter weather hit much of the United States.

Housing also remains in overall good shape. January numbers aren't due out until next week, but the December data was nothing short of robust. Existing home sales rose 7.7% to 5.46 million units.

Building permits rose 13.5% in January, a sign that construction will remain healthy. For the week ended Feb. 12, mortgage applications rose 8.2%.

In other words, consumers, who drive 70% of spending in the economy, don't seem worried. People scared about losing their jobs don't buy new cars and homes.

To be sure, corporate earnings have slowed quite a bit over the last few quarters. But new data suggest that's about to change.

The financial data analysts at FactSet Research Systems Inc. (NYSE: FDS) have run their numbers and believe that, starting with the second quarter that begins in six weeks, earnings will begin to rebound.

And that should give stock prices - and your portfolio - a nice pop.

For the second quarter, FactSet forecasts a 3.1% increase in earnings. That's about 29% more than the U.S. GDP's recent average growth rate of 2.4%.

There's more good news after that.

FactSet forecasts a 6.3% rise in third-quarter earnings for companies in the S&P 500 - and expects that rate to more than double to 13.6% in the fourth period.

The trend bodes wells for tech investors like you because stock prices follow earnings growth. In other words, this is no time to abandon the market.

By staying in now, you're setting yourself up for a big rebound.

And I believe that tech will resume its role as market leader. Even after the recent sell-off, the Nasdaq has beaten the S&P 500's 46% returns over the past five years by 50%.

That said, the markets will remain volatile in the short term. And that means this is still a stock-picker's market.

Let me show you a specific example from my premium trading service Radical Technology Profits. On the first day of trading this year, I recommended my members buy what I called tech's "most hated stock."

We loved it - recently taking 15% gains on half that position in about a month for an annualized return of 180%. During that same period, the S&P 500 was down 8%.

And that's just one stock we're making hefty profits with at "Rad Tech." For example, I just introduced my members to a small biotech company that's secured a monopoly on what just might be the most valuable resource on the planet.

This extremely hard to procure substance is helping doctors treat debilitating tumors in patients around the globe.

Thanks to its monopoly, this firm is now poised to "evolve" from a small research company into a global biopharmaceutical leader. It's also getting ready to go public on the Nasdaq. And this may be your last chance to grab shares before that happens - and everyone else discovers this gem.

You can find out more about this company and its resource right here.

Of course, at Strategic Tech Investor, I'm now searching for the best tech bargains in this oversold market.

When I find them, you'll be the first to hear about it.