You've got to play this rally like your future depends on it... because it does.

After a long, steep drop, stocks came rushing back on Friday, Feb. 12.

You see, that rally might be the beginning of another leg up in the Great Bull Market. Then again, it might just be a dead cat bounce and deadly bear trap.

Fortunately you don't need a crystal ball to know where stocks are headed.

That's because sometimes markets give clear signals about what they're doing - and where they're going.

When the markets do clue us in on their future, it's like a gift.
Here, let me unwrap this one for you.

How the Markets Are Feeling

How We Got to This Point

The six-year mega-rally since 2009 has been called the most hated and most artificially pumped-up market ever. With good reason.

The Great Bull Market that began in March 2009 registered all-time highs across all major market indexes in late spring, early summer 2015. A huge driver of this rally was the U.S. Federal Reserve's massive stimulative efforts, particularly its articulated "wealth effect" policy to pump up markets to make consumers feel better about their 401(k), pensions, and futures, and to reinvigorate their consumption habits.

So stocks went sideways when warned the Fed was taking its foot off its QE accelerator. And they crashed in August when facing Fed rate hikes... just as China tried to devalue its currency.

In that instant the market changed.

All of a sudden the world realized that if China was in trouble and wanted to devalue its currency to prop up exports - the engine of its miraculous debt-fueled growth - then emerging markets would have to devalue their currencies to compete with China.

At the same time, oil and other commodities were taking big hits.

The global reality was (and still is) that if the U.S. raises rates and strengthens the dollar, while other countries are trying to devalue their currencies (or end up having them devalued by currency market selling), the cost of servicing some $11 trillion of dollar-denominated loans would skyrocket and bankrupt a lot of borrowers. And, with oil and commodity prices collapsing, producers and exporting countries would struggle to make debt service payments and meet budgets.

The great global negative feedback loop had been triggered.

Intervention by the Peoples' Bank of China, by the ECB, by the Bank of Japan, and market Muzak from the Fed calmed markets, which then bounced back during the fall.

But nothing had changed. We're still facing the same dilemmas global markets came to grips with last August.

Stocks realized that as 2016 dawned. Nothing has changed.

And that's the backdrop for where we are today.

Like all great and memorable gifts, this one comes with a sentimental card. In fact, it's packed with sentiment, and that's a great thing, because understanding how this market "feels" is critical for investors.

The predominant sentiment these days is uncertainty. The markets are nervous. Very nervous.

Everything that's happened since August 2015... the Chinese yuan devaluation, worries about slowing Chinese and global growth, the Fed's rate hike, plunging commodities prices... You name it, the market is worried sick about it.

In that context, it's easy to see why volatility is so high right now.

Not only that, but warnings are starting to flash all over - as I'll show you today in four important charts. They're not hard to read, and you can bet that every hedge fund manager, trader, and analyst on Wall Street is looking at them right now... And they're worried sick.

The Most Important Four Charts for Investors Today 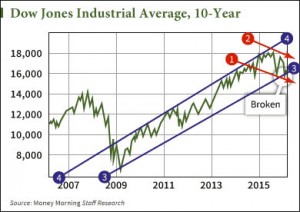 The above 10-year chart of the Dow Jones Industrial Average shows how powerful the bull market up-trend (3 and 4) was.

That's a dire warning. And worse, a new down-trending channel may become the major channel.

Now check this out...

The above 10-year chart of the S&P 500 looks almost exactly like the Dow chart. It's broken its major up-trending support channel line. Notice the beginning of a descending wedge pattern (lines 2 and 3) - I'll get to that in our last chart, where it will loom larger.

Let's check out the Nasdaq... 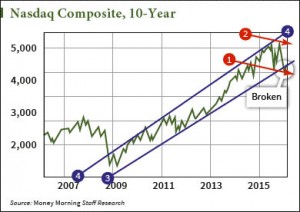 This 10-year chart of the Nasdaq Composite is essentially no different than the Dow Jones Industrial or S&P 500 charts.

First, the minor point: No matter how different investors think the Nasdaq is with all the FANGs and technology and biopharma darlings, the reality is that it's no different than any other market barometer.

Now comes the scary part: Correlation is dangerously high. And not just in U.S. stocks, either; correlation often approaches 90% across all global markets on some days.

That's a monster of a flashing red light. A crash anywhere can take down all markets like falling dominos.

Here's the last chart you need to see... 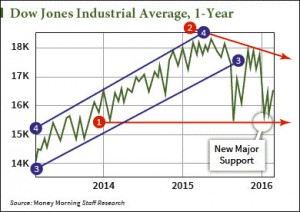 On a shorter-term basis, just one year, you can see the well-defined up-trending lower channel support line (3) being broken sharply.

Stocks tried to go higher but found selling pressure (resistance) when they got back above the old up-trending lower channel support line, which now is a resistance line.

Notice how the market fell and reached the same lows it made last August. That double bottom is now a major support line (1) for stocks.

Now, remember that descending wedge formation I showed you above? Here's the thing: What that tells us is the market is making lower highs and, so far, holding support.

If stocks continue to move along within that descending wedge (1 and 2), that's a major warning that there's not enough buying interest to break higher, that buyers are getting (more) worried.

If the support line of the wedge is broken, there's no telling how fast or how far stocks could fall.

That's what the market is telling us.

The rally we're experiencing is only temporary - unless the Dow stocks can get above 16,500 first, then get above 17,500.

All the indexes have to trade above the upper down-trending (resistance) lines of all the charts' down-trending channels. Otherwise stocks are just moving sideways and down.

There is a lot of room for stocks to move up within the new down-trending channels they've formed. So, playing bounces is okay - as long as you use tight stops.

The smartest way to play bounces, or luckiest way, is to try and get in as an up-move starts (in other words, don't hesitate if you think you see a rally coming).

Again, use very tight stops. I use 5% stops when I'm trying to catch these rallies. And raise your stop to where you get into positions as soon as they rally higher.

While the Dow could theoretically and technically go 1,000 points higher, for my money the risk is too high to jump in with a lot of capital.

Because nothing has changed, the same global themes, the same negative feedback loops, are all out there, I read these rallies from oversold levels as nothing more than dead cat bounces.

These kinds of rallies, big pops higher in what I see as a bear market, are dangerous.

They can be the ultimate bear trap and ruin investors. And that means these are trading markets, not solid investing markets.

There will be plenty of time to get in and ride the next Great Bull Market when it arrives.

But it's not here. We're either in no-man's land, or we're about to drop like a stone.

That's what the markets are telling us. It's right there on those charts, like a roadmap.

Follow Shah on Facebook and Twitter.
As Shah said, the markets run the very real risk of collapsing before they get any better. That's generating lots of anxiety right now... but it's also handing us a phenomenal trading opportunity. Shah himself has used this kind of trade to give his readers at least six triple-digit gains this year - including one that topped 299%. Make no mistake: The next few months could be the most lucrative in stock market history... for those who know how to make this trade. Click here to learn more.