Alphabet stock is the Money Morning Pick of the Week.

The company has been on a roll lately, with earnings consistently impressing Wall Street. For one day earlier this month, Alphabet even managed to push past Apple Inc. (Nasdaq: AAPL) to become the most valuable company in the world.

But success has only made Alphabet hungrier. And that's a big part of why Money Morning Technical Trading Specialist D.R. Barton calls GOOGL a "legacy stock."

Alphabet Inc.: About the Company

Google was born in 1997 as the result of a research project by two Stanford University students, Larry Page and Sergey Brin. The odd name is a misspelling of "googol," the mathematical term for the number represented by the numeral 1 followed by 100 zeros.

Brin and Page were seeking to create a search engine that would use backlinks - links coming from web pages outside the site - to rank search results. The different approach yielded more relevant results than rival search engines of the day.

In 2000, Google began selling text-based ads that drew upon the terms the user was searching. The company had found its business model. It worked because Google soon began to dominate search. It captured a third of the search market by 2004, and by 2009 had nearly two-thirds.

The Mountain View, Calif.-based Google became part of the umbrella conglomerate company Alphabet on Oct. 2, 2015. Alphabet generated $74.5 billion in revenue in 2015 and employs about 61,800 people worldwide. 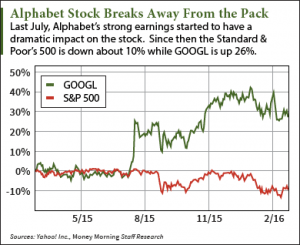 Alphabet stock has been a proven winner since its IPO in 2004. In less than 12 years GOOGL stock has risen nearly 1,300%.

Its performance over the past eight months is no less impressive. Alphabet stock is up 26% since last July, which really stands out when you consider that the Standard & Poor's 500 Index is down 10% over that same time span.

The primary force behind that rise in Alphabet stock has been three consecutive quarters of strong earnings.

But here's why GOOGL stock is far from peaking...

Why GOOGL Stock Is a Buy

Barton says investors can't overlook the significance of what Alphabet is achieving these days.

"You have to give them props for being forward-looking, for doing innovative things, and for killing on their core business - doing it so well they can do all these other fun, amazing things," Barton said.

Alphabet's free cash flow number in particular is amazing given that the company invests billions in "moonshot" projects, such as its self-driving car, that generate little or no revenue.

Such projects are an investment in the future, Barton said, paid for by Alphabet's dominance of search in the present.

"They're still No. 1 in search with 63%, three times bigger than their closest competitor, and they have not yet broken out those numbers for YouTube. We think they're about $7 billion this year. Once they break those out they're going to get a bump," Barton said.

Despite its gains over the past eight months, GOOGL stock has slipped about 8% since the start of the year. Given Alphabet's thriving business and strong prospects for the future, Barton sees the drop as a chance to buy at a discount.

"I like it at this pullback price," Barton said. "It's a legacy stock right now."

But the high target is $1,080 - a 50% gain from the current price. The only thing missing here is a dividend, but Alphabet's long-term growth prospects make that a non-issue for now.

In Case You Missed It: Last week's pick of the week was a stock that has doubled in two-and-a-half years, thanks to a brilliant new strategy that jump-started profits. Find out why Money Morning Defense & Tech Strategist Michael A. Robinson likes to call this company the "crown jewel of tech"...