Now the focus shifts to what the decisions from the FOMC meeting today mean for investors and their money.

Before we get to that, here's what investors are looking for from today's meeting... 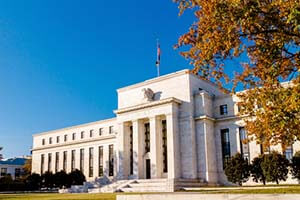 No change in monetary policy is expected at the end of the Fed's two-day meeting at 2 p.m. today. Still, investors and analysts will be carefully parsing the FOMC's latest policy directive and economic projection in the statement.

Fed officials have turned cautious in recent months as global stocks have become extremely volatile. The Fed is also cautious as worries of a global recession mount and oil prices continue to remain low.

But with crude prices and stocks rebounding over the past six weeks, the Fed will likely have a more upbeat tone in today's statement. Investors will be looking for updates on the Fed's view of the economic landscape. Any changes to the statement's language could signal when the next interest hike is likely.

The fed funds futures market shows a 0% probability of a rate hike at today's meeting. So investors can expect a change in the projected number of interest rate increases this year. When the Fed raised rates in December for the first time since 2006, the central bank scheduled four interest rate hikes this year. That number has likely been reduced to two.

Inflation is another must-watch topic from today's FOMC meeting...

"The most important factor to watch in the Fed statement is what they say about inflation and how much emphasis they put on it," David Donabedian, chief investment officer of Atlantic Trust Private Wealth Management, told The Wall Street Journal. If the Fed's statement puts a spotlight on the recent uptick in inflation, "it could make the markets nervous and conclude that more rate hikes are indeed in the future."

Following the January FOMC meeting, policymakers said inflation was expected to remain low in the near term, partly due to further declines in energy prices. However, the Fed said inflation should rise to 2% over the medium term as the "transitory" effects of low oil and import prices diminish. Strength in the labor market should also boost inflation.

Since the January FOMC meeting, oil prices and inflation have climbed. Consumer prices in January climbed 1.3%. That's the biggest rise since 2012.

Now, here's what the tone of today's FOMC meeting will mean for stocks, precious metal prices, and most importantly, your money...

What the FOMC Meeting Today Means for Your Money

A hawkish Fed could rattle stocks, precious metals, and the bond market in the short term. Market participants have been guarded ahead of this week's FOMC meeting. Trading volume at the NYSE was significantly lower than average Monday and Tuesday. That reflects the wait-and-see stance investors have taken ahead of the Fed decision.

Markets have become extremely volatile in recent months and are sensitive to changes in central bank policies.

Here's what investors should watch for:

Stocks: Normally, higher interest rates indicate that economic growth is solid. That is good for stocks. Bank stocks are the most likely to benefit. The Fed's low-interest-rate policy has been a mixed blessing for banks. It has limited their borrowing costs, but it's also lowered what banks can charge on loans and earn on other investments. The difference between the two - the net interest margin - has been declining since 2010. The sustained low rate environment has crimped revenue and earnings. That's why bankers and bank stock investors will be okay with higher interest rates.

Gold Prices: Gold prices typically fall when interest rates climb. The precious metal doesn't pay any interest like a bank account, CD, or bond. But if the Fed drops clues about quickening inflation, that would support gold prices. The yellow metal has long been coveted as an inflationary hedge.

Bonds: The bond market is the most exposed today. High rated debt, like U.S. Treasuries, is trading with extremely low yields. That means they are vulnerable to even a modest rise in Fed interest rates. Junk bonds, meanwhile, could suffer as borrowing gets more expensive.