Editor's Note: We're sharing this excerpt from this week's Money Map Report because some new data about the full extent of the Fed's influence on stock market growth has come to light, and Keith believes everyone should know the truth of what's happening...

I wasn't the least bit surprised by the Fed's move Wednesday to stand pat on interest rates.

As I noted on CNBC's Closing Bell, talking is just about the only policy tool still available to Fed Chair Janet Yellen.

That's because the world's other central banks are doing her dirty work for her.

This isn't a popular concept amongst those who like to believe the Fed is in control, but it's all too real. The People's Bank of China unpegged the yuan last August. Then the Bank of Japan introduced negative interest rates in January. And, last week the European Central Bank unleashed Super Mario Draghi's monetary bazooka - all of which make it impossible for Yellen to raise rates at the moment.

Speaking of which, traders breathed a sigh of relief based on the fact that Yellen may be taking rate hikes off the table for now, lending credence to the thought this morning that the Fed may finally be stepping out of the way.

What happened Wednesday is another very deliberate move in a long string of moves that's designed with one intention and one intention only - to manipulate markets.

Not that that's new news - but here's what is.

In the Money Map Report, we've talked many times about how and why there are singular inputs that move markets during specific points in our economic history. I raised a lot of eyebrows when I said that the Fed accounted for 85% of all market action since 2008, but it turns out I may have been too conservative!

And that means you've got to change your stock selection methods if you want to make sure you profitably capture what's next.

The new 93% figure is according to Brian Barnier, a principal at ValueBridge Advisors, who analyzed publicly traded stocks since 1950 by dividing the total value of stocks by other economic factors until he found the one commonality that produced a single horizontal line.

If you think back to your high school math courses, a single straight line relationship between two factors means that the numerator and denominator in any equation are moving at the same rate.

That, in turn, tells you that the relationship is both constant and causal - meaning the numerator can reasonably be attributed to the denominator. Not always, mind you - no financial model is perfect - but enough of the time that you can infer relationships others cannot see.

What's interesting about this is that he's quantified relationships you and I have been talking about for years. And the results are extraordinarily clear. 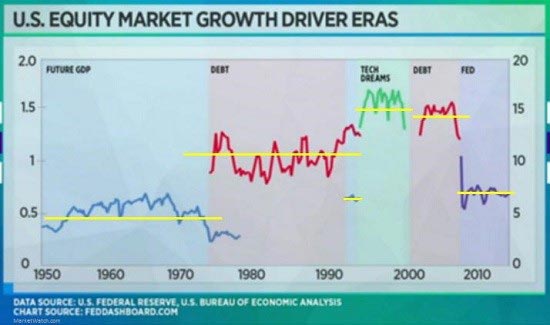 From the 1950s to the mid-1970s, future GDP expectations drove things;

...the late 1990s were dominated by commercial paper and financial engineering;

...then came the housing bubble and, you guessed it, mortgages; and

Not surprisingly, the markets have become range-bound since the Fed stopped buying bonds.

There's a very good reason for this...

Here's What the Fed Is Missing

Policy wonks and conventional economists cannot understand why. To their way of thinking, the markets have everything they need to power up.

What they're missing is that the Fed's models fail to account for anything beyond manufacturing and simple consumption data.

If we lived 100 years ago, this would be fine, because we could measure widgets - something I've railed on in recent appearances on CNBC and FOX Business both. But we're not, so economic models built for widgets aren't appropriate.

The technology we live with today ensures that the variable cost of everything goes down over time. That means consumption has become a deflationary input.

The lesson we can take from this is clear:

Anybody who remains glommed onto conventional production-based models will lose out over time. That's because companies that cannot maintain margins and consumption at the same time will suffer from declining earnings over time.

On the other hand, companies like Apple Inc. (Nasdaq: AAPL), Facebook Inc. (Nasdaq: FB), and Netflix Inc. (Nasdaq: NFLX), for example, have the power to increase margins by virtue of increasing consumption.

And that makes them profitable "must haves" in the truest sense of the word.

Even if there's a little slack while Yellen cooks up her next "move."

More from Keith... Campaign spending has already reached record levels - and we're only midway through the primaries. Politicians on both sides of the aisle are spending billions to saturate the media and sway public opinion. But while you can't escape the noise, you can profit from it: One media company is perfectly positioned to capitalize on campaign ad dollars - with 92 TV stations in 50 critical election markets - and could deliver gains of up to 420% as campaign spending surges. Click here to get all the details and start receiving all my Total Wealth research free.

I certainly do not consider Facebook or Netflix to be "essentials" or "must haves" in my personal life or consumption. However, I elected Netflix because I prefer movies at home and not with the general public in a crowded theater. ( The Fat Lady eats a tub of buttered popcorn in the seat behind your ear).

I have never used social media or Facebook and could live the reminder of my life just fine without it. Don't need it. So for me, Fb is not a "must have" by any means. In a Fed-Managed economy, the essentials have been shifted away from the physical to the informational sphere often times. Terms have been redefined in recent years ( New Normal ).

A British National runs a service business near my house. He told me one reason for the prevalence of so many people doing the same thing is the same in America as in England: Socialism. Never thought about trends that way, but he may be on to something. So, its a bit more than the FED by itself. Federal Reserve and other central bank monetary policy is pushing the trend of greater socialism right along.

America is no longer a free market economy. The government drives economic activity. It all started with Roosevelt and was made permanent by LBJ's not so great society. The stock market goes over the top as a result of FED engineering not worker productivity. However, this "new order" is destroying the traditional middle class while enriching those who utilize privileged information to enrich themselves by manipulating the financial markets. For example, someone knew milliseconds after Buffett initiated a huge purchase of KMI at about 10.00 dollars followed by a number of hedge funds. The price rose to about 20.00. Not a bad days work. Do you think it was luck that those hedge funds accidently followed a massive accumulation by Buffett…sure? Get real! Increasing faces on facebook is an increase in GDP? Apples phones are build over seas by slave labor in horrendous toxic work environments. Their sales pump up GDP numbers, but at what benefit to the country, NONE. They hide their profits in over seas accounts and do not recycle those profits into the American economy had they used American workers. Do not worry. The irresponsible FED will just keep printing and printing and printing, to maintain the stock market. Regardless of how it is distorting middle class savings.