The Alibaba stock price has rallied 12% in the last month, and we see BABA stock climbing even higher from here in 2016. 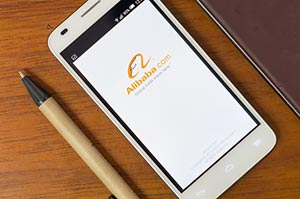 But before we get to our long-term outlook on the Alibaba stock price, here's why shares are climbing this month...

Shares of Alibaba Group Holding Ltd. (NYSE: BABA) have risen sharply as markets rebounded from early 2016 dips. Over the last four weeks, U.S. investors have sent the Dow and S&P 500 up 7.2% and 6.9%, respectively.

That has many investors piling back into beaten-down stocks like Alibaba. The year got off to a volatile start, and the Alibaba stock price dropped more than 17% in the month of January alone.

A key reason for that early volatility was the economic slowdown in China, the world's second-largest economy. In January, China reported 2015's GDP was 6.9%. That was the lowest rate in a quarter century. That has also had a major impact on the Chinese stock market, which is down some 47% since last summer's peak.

Since Alibaba is a Chinese company, investors panicked that the decelerating Chinese economy would have a major impact on Alibaba's business. Alibaba is the most dominant player in China's e-commerce sector.

But many investors have overlooked the fact that Alibaba is more than just a Chinese company. It is becoming a global powerhouse...

Alibaba has been actively taking stakes and buying companies around the globe. The company has also been venturing into areas outside of retail, such as online video and local services.

This Monday, Alibaba said it will invest $150 million in its Taobao Software subsidiary to further develop its Online2Offline fresh food e-commerce brand.

In November, Alibaba announced it would make online video provider Youku Tudou a wholly owned unit. In June, Alibaba and its financial-services affiliate said they would collectively invest approximately $1 billion in food-ordering app Koubei to develop its offerings and services within the dining arena.

All of these moves show Alibaba's commitment to becoming a global brand, which will be a major catalyst for the Alibaba stock price.

But the biggest reason to be bullish on Alibaba stock is the incredible growth we're seeing from its home market. It's a market that reached a value of $2.5 trillion in 2015 and shows no signs of slowing down...

Technology is vastly changing shopping habits in China, and Alibaba is leading the charge with its online payment platform Alipay.

A decade ago only seven million people in China had a credit card, and almost all transactions were made via cash. Last year 358 million Chinese, or roughly half the country's Internet users, used mobile devices to shop and make payments.

The Alibaba stock price may have fallen, but BABA is oversold...

Alibaba Chairman Jack Ma and Vice Chairman Joe Tsai appear to share that sentiment. The company reported earlier this month the two have signed an agreement to use their private funds to buy back some $500 million (collectively) in Alibaba stock as part of a $4 billion stock repurchase program announced in August.

During the quarter ended Sept. 30, 2015, the company repurchased 40.8 million shares for $2.74 billion. The buyback program should boost reported EPS growth by reducing the number of shares.

Of the 40 analysts that cover the Alibaba stock, 31 rate shares "Buy." Three have an "Overweight" rating on the stock, five maintain a "Hold," and just one rates shares "Underweight." There are no sell ratings, according to data from The Wall Street Journal.

How do I buy shares of these companies?