Today, I have a somewhat unusual recommendation for you.

It springs directly from the private-equity fiasco I've written about before - but it's not a short. It's actually a long play that will take some time to mature.

But I expect it to pay off big time... if you're patient.

In order to understand this play, you have to understand the looting of Caesars Entertainment Corp. (Nasdaq: CZR) by its private-equity sponsors Apollo Global Management LLC (NYSE: APO) and TPG Capital (formerly Texas Pacific Group). I've been following this sorry tale for quite a while in my Credit Strategist newsletter, and I've decided I don't want you to miss out, either.

Here's the story... and the recommendation.

In a jaw-dropping series of maneuvers to steal billions of dollars of assets for themselves, APO and TPG engaged in a deliberate scheme to move assets out of the reach of creditors while Caesars' business deteriorated under the weight of $30 billion of debt borrowed to take it private in 2008. This scheme forced the value of the company's subordinated debt to drop by more than 80% and triggered a series of nasty lawsuits against Caesars, APO, and TPG by some of the country's most formidable investors, including David Tepper and Paul Singer.

It now appears that justice may be done. In a long-awaited March 15 report, Bankruptcy Examiner Richard J. Davis, who was appointed by the court hearing Caesars' bankruptcy case, found that the creditors had strong claims against APO and TPG of between $3.6 billion and $5.1 billion. Mr. Davis also found that Caesars was insolvent as long ago as 2009, which demonstrates just what a disaster this deal was. When a company becomes insolvent, the fiduciary duty of management and directors shifts from the stockholders to the creditors.

But instead of acting like fiduciaries, APO and TPG acted like thugs. Rather than take steps to deleverage the company through debt-for-equity exchanges or negotiate responsible debt reduction with creditors, these two firms (which manage money for some of the largest institutions in the world) started violating both the spirit and the letter of Caesars' debt obligations by shifting assets out of the hands of creditors. They tried to disguise their efforts with the assistance of willing attorneys, accountants, and investment bankers, all of whom checked their ethics at the door of Caesars Palace, but they were fooling nobody. While Mr. Davis did not find evidence of civil or criminal fraud (a point on which I strongly disagree), he made it clear that the private-equity firms should settle this matter before it goes any further.

Heeding Mr. Davis' advice, Caesars announced that it would work to settle this matter expeditiously and increase its initial offer to contribute $1.5 billion to the bankruptcy reorganization. The money will come from APO and TPG, of course. The question now is how much money APO and TPG will have to kick in to avoid what would without question be an ugly day in court. 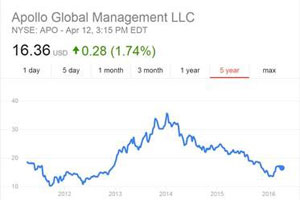 This mess has already severely damaged the reputations of APO and TPG. Since peaking at $35.72 per share in early 2014, APO's stock has lost more than half its value and is currently trading at $16 per share. TPG has debated going public for years but has been unable to pull the trigger. The stock prices of all publicly traded private-equity firms have declined sharply since 2014, but these firms appear to have been particularly hurt by their disgraceful conduct at Caesars.

Sadly, this is not the only situation in which APO and TPG have been accused of abusing the people who lend them money for their LBOs. Both firms have a history of this type of behavior; Caesars is just the most appalling example.

Here's Why CZR Stock Is Going Straight Up

But like everything in life, trouble brings opportunity. In this case, investors who play this situation correctly stand to make big profits.

Negotiations are ongoing to resolve this case and nobody is talking numbers, but based on my knowledge of the parties involved, it seems reasonable to expect that APO and TPG will ultimately pay something in the range of the $3.6 billion to $5.1 billion of damages that the Bankruptcy Examiner targeted in his report. They will likely do this through a combination of cash payments, forgiveness of Caesars debt that they own, and other considerations.

The settlement will determine the value of Caesars' distressed debt at the time the company exits bankruptcy. The biggest and most widely traded piece of subordinated debt is the company's 10% Second Lien Notes due 2018. These bonds dropped to as low as 10 cents on the dollar around the time that Caesars filed for bankruptcy in early 2015. At that time, I recommended that readers of The Credit Strategist buy this debt based on my belief that APO and TPG had committed serious breaches of the law and would be forced to make substantial payments to bondholders that would cause the bonds to rise in value. Since then, these bonds have rallied and recently traded in the mid-40s. But I still expect them to rise further. Let me explain why.

And, freed of the burden of paying over $1 billion a year in interest as well as the pernicious influence of APO and TPG over the business, a deleveraged Caesars should prosper.

There is a long history of companies emerging from bankruptcy with deleveraged balance sheets whose stocks have skyrocketed in value. I believe that CZR stock will do the same thing over the next few years. While the stock may initially drop in value due to the fact that a large number of new shares will be issued to creditors in exchange for their debt, a greater portion of the company's value will be reflected in the stock rather than in the remaining debt. As the new unleveraged Caesars moves forward, the stock should rise significantly.

This means that the stock received by creditors should make a great investment in the years ahead. As one of the premier gaming companies in the world before private equity got its hands on it, Caesars owns trophy properties.

Further, a deleveraged Caesars will be able to reinvest in its business instead of paying all of its free cash flow in interest to creditors and in egregious fees to its private-equity owners.

Over time, I expect CZR stock to rise sharply as the company's value is shifted from creditors to equity holders.

That means that if you buy and hold Caesars Entertainment Corp. now - and if you're patient - you should see a sizeable payday down the road. At under $7.00 per share, it is a cheap way to invest in one of the great gaming companies that can now finally move forward without the albatross of LBO debt.

What if you already own bonds expiring Dec 2018 ??