I've been predicting that the bears would be taking over the markets in May and, just a week into the month, they're running with a vengeance.

The Dow Jones Industrial Average, S&P 500, and Nasdaq have all erased their recent gains over the past trading week.

But there is one index that's faring better than the majors... It's the "fear index."

Officially known as the Chicago Board Options Exchange (CBOE) Volatility Index (VIX), it is an extremely popular index that measures the volatility in the markets.

Naturally, right now more and more traders are playing the VIX to fatten their wallets off the back of investor fear in the markets.

Well, there's a right way and a wrong way to trade volatility, and what these folks are trading to make a quick buck or two is outright dangerous to your wealth - now and into the future.

So before you make the same mistake they are, let me tell you why this is the worst way you can play volatility...

After my family, my greatest passion is studying the markets. It's really hard for me to pull away from the markets when they're open, and I get a bit stir-crazy when the markets are closed - that's how deep my passion runs.

And I absolutely love options - and trading them. In fact, I love trading options on virtually every instrument out there that allows me to.

But there is one instrument I'll never trade options on... 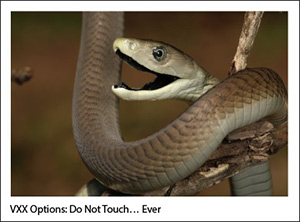 In fact, even if you offered me money to trade these options, I'd tell you to keep your money.

These options are like Black Mambas, some of the nastiest, meanest, most poisonous snakes on Earth, and I don't want to go anywhere near them.

But before we get into why you shouldn't either, let's back up a minute and talk about what these are...

VXX is an exchange-traded note (ETN) that offers exposure to volatility in the markets through the VIX. It is not a stock - but you may have heard it referred to as one since it can be bought, sold, shorted, and quoted like a stock.

VXX is an instrument that was created to track the first two months of the VIX. As I mentioned above, the VIX has come to be known as the "fear index," as it shows the expected 30-day volatility in S&P 500 near-term futures, but it really reflects volatility across the major indexes, so it's a useful gauge of the level of fear investors have.

And so VXX options, of course, are options you trade on the VXX (it's important to note these are different from VIX options, which we'll talk about in the future).

The VXX uses what's called a "daily rolling position," which means that it tracks a mix of two or more months of VIX futures. It starts out as a pretty even mix between the first and second month, but as the first month's futures approach expiration, it shifts its weight more to the second month.

Now let's talk about why you should stay far, far away... 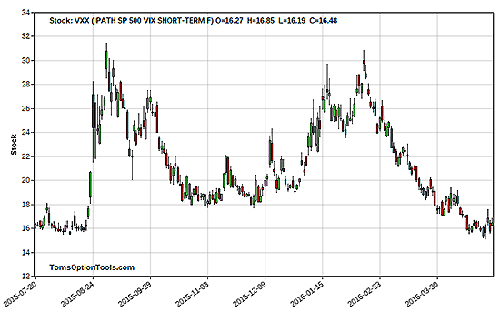 I'm not a fan of trading options on the VXX because it is cheap and is priced in the teens, as you can see on the left-hand side of the chart above.

Personally, I favor trading options on securities that are trading at higher prices than this because there's more room for huge profits. Now you may not agree with me... and that's fine... But my primary goal today is to talk to you about why there's a much better way to play volatility than trading VXX options.

Say you're waiting for the index to hit 14 so that you can buy a VXX option. Just when you think it's cheap enough to buy the option outright, a reverse split happens...

As you know, when a reverse split happens, you end up with fewer shares at a higher price than you did before. But in the case of a reverse split on a VXX option, the price is forced higher - only to assume the downtrend once again. Take a look at the most recent reverse splits on the VXX:

So forget about looking at a historical chart longer than a few years if you're interested in trading VXX options. It will look like the VXX is down a lot - relative to where it's been.

For the most part, reverse splits have to do with this.

Since the VXX tracks the first two months of the VIX futures, it means those futures prices have an effect on any VXX options positions you may have.

This is similar to trading options on futures - which are extremely risky - which isn't necessarily the place I'd want to be. Futures also don't trade in correlation to the VIX as well as I'd like to see for such risky investments, and it's just not worth it to your portfolio to rely so heavily upon something so risky like futures.

What's more, VXX options run the risk of contango - you could pay more in the future for your contract than you're paying right now.

I'm not a fan of contango and wouldn't encourage you to trade VXX options because contango pushes down on price. What I mean here is that volatility can go higher and higher but won't necessarily translate into the VXX going higher. It may go slightly higher, but not as much. And when volatility falls, the VXX could fall even further.

Now, if you're thinking "just buy puts," keep in mind that contango is already priced into the options, making them more expensive. And if they're more expensive, you're going to face a bigger challenge when it comes to profiting from those options going forward.

So let me show you a better way...

When you want to play the volatility in the markets, consider trading options on the SPDR S&P 500 ETF Trust (NYSE Arca: SPY) instead.

These are two ways you can play it:

Consider taking a bearish position on SPY if you think volatility will rise, causing the markets to fall.

Conversely, consider taking a bullish position on SPY if you think volatility will fall, causing the markets to rise.

This strategy is much more correlated to volatility, and you face much less risk. Besides, there are just too many other better... options... out there.

And I'd much rather focus my attention on prospects where making money is easier and more reliable.

Wall Street can't keep this a secret any longer... Five years ago, a whole new way to trade hit Wall Street. Since then, bankers, traders, and hedge fund managers have been keeping these incredibly fast profits to themselves. But now Tom Gentile has spotted a pattern that even the Wall Street insiders can't see. And he's ready to show how you can double your money in four days - week after week. To take part in Tom's special event on Wednesday, May 11, and get all his updates, just click here now.

I have been selling naked calls on UVXY weekly which is a no brainer and have made a fortune. This symbol never goes up and stays up due to extreme Contango.