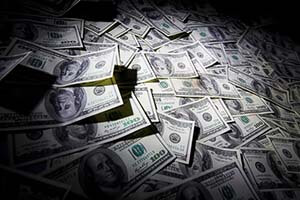 Many laws govern how dark money groups are supposed to spend their donors' money.

The problem is these laws aren't properly enforced...

Dark money groups are notorious for getting away with just about anything, according to the Center for Responsive Politics' Dark Money Researcher Robert Maguire.

We'll look at why dark money groups are so hard to regulate in a moment. But first, here's a quick primer on what "dark money" groups are...

The origin of dark money groups goes back to the Citizens United vs. Federal Election Commission case in 2010. Citizens United, a conservative nonprofit, alleged that the first amendment prevents the government from restricting independent political expenditures. The U.S. Supreme Court agreed and granted unprecedented fundraising power to political fundraising groups, like super PACs.

Another of these fundraising groups mentioned in the court's decision were "social welfare organizations." These organizations are 501(c)(4) nonprofits that can spend money to promote political causes.

It's no surprise that after the Citizens United ruling, The Sunlight Foundation - a nonprofit that fights for government transparency - noticed increased activity within social welfare groups. It also realized just how difficult these groups were to track and how easily they concealed their sources of million-dollar donations.

Sunlight began calling these groups "dark money organizations" because of their under-the-table relationships with their donors.

Dark money groups pour millions into elections to influence the way you cast your vote. During the 2012 election cycle alone, dark money groups spent upwards of $300 million on TV and radio ads, mailers, and general airtime.

And government "regulations" actually play a part in helping them conceal their activities to American voters...

Dark money groups aren't allowed to spend too much money on political advocacy, although that's their main purpose. The IRS requires that their political spending be kept below 49% of total expenditures.

That's one of the primary so-called "limitations" for these groups enforced by the federal government.

But the definition of "political advocacy" gets dicey when expenses labeled as "educational" or "membership building" are considered part of a dark money group's primary purpose, according to the Center for Responsive Politics.

These general categories allow dark money groups to spend money on basically whatever they want - then categorize and report their spending as something it's not, Maguire revealed.

"There are people saying that they (dark money orgs) can't spend money on ads for or against political candidates," Maguire said, "but they absolutely can."

These groups use wide loopholes in the FEC's laws to buy web and TV ads, mailers, and TV air time without reporting their political intentions, according to the CRP.

A television ad in 2014 from a dark money group. This group, Americans for Prosperity, was able to file this political ad as an educational ad because of IRS loopholes, the CRP found.

The only real restrictions these political nonprofits face is that they have to air their ads at least 30 days before a primary and 60 days before a general election. Their ads also can't contain a specific call to vote.

Other than those rules, there's no FEC guideline for ad spending to be reported.

There's been hesitance in Washington - mostly with Republican lawmakers - to reform campaign finance laws and properly regulate dark money groups, according to Maguire. Most dark money organizations are conservative-leaning, which could be one of the possible reasons for Republican reluctance.

On top of that, there are many high-powered lawyers behind dark money groups, Maguire said. These lawyers specialize in exploiting IRS and FEC loopholes for dark money groups. And they're one of the best ways dark money groups get away with political advocacy while being a nonprofit.

Take Crossroads GPS, for example. Crossroads is a popular dark money group among wealthy conservatives. It battled the IRS over five years to obtain tax-exempt nonprofit status. One of the IRS' main objections was that Crossroads had too many political expenditures. But in the end, Crossroads' smart (and well-compensated) lawyers helped it achieve full nonprofit status in November 2015.

A quick explanation of how one dark money group has taken campaign finance to new extremes...

The Power of Super PACs: After the Citizens United court case, super PACs were granted unprecedented fundraising power. Now they're threatening to affect your vote in 2016...