The odds of a Fed rate hike following the June FOMC meeting are rising this morning (Monday).

This weekend, the president of the Federal Reserve Bank of Boston, Eric Rosengren, said the United States is close to meeting most of the economic conditions policymakers set in order to increase interest rates. 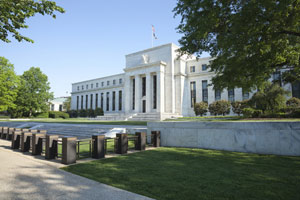 Rosengren told the Financial Times he is preparing to back tighter monetary policy. Rosengren said he moved to a more hawkish stance after financial and economic indicators over the last couple of months started moving in a positive direction.

Those comments follow last week's release of the minutes from the April FOMC meeting, which had ripple effects on the markets…

Prior to the minutes' release, markets had been placing low odds on a Fed rate hike in June. Fed Chair Janet Yellen had appeared more dovish in recent speeches, saying the Fed would move slowly with rate increases. But things changed Wednesday when the April FOMC minutes revealed a June rate increase is on the table.

"I want to be sensitive to how the data comes in, but I would say that most of the conditions that were laid out in the minutes, as of right now, seem to be … on the verge of broadly being met," Rosengren said this weekend.

The three tests the Federal Reserve has set to justify a rate hike are:

Rosengren told the FT the Fed had set a "relatively low threshold" for growth improvement after the first reading on U.S. gross domestic product (GDP) came in at just 0.5%. He also noted that the United States is making progress on the inflation front and that global headwinds are waning.

Yet Britain's referendum on its European Union membership next month is still a grave concern.

Here's what else could be preventing a Fed rate hike following the June FOMC meeting and the odds we will see one next month.

The Odds of a Fed Rate Hike in June

The UK "Brexit" situation is being closely watched by global central banks.

The vote to decide if Britain will exit the EU takes place the week after the Fed's June meeting. Rosengren said the vote shouldn't stand in the way of U.S. monetary policy changes, but it absolutely could.

The International Monetary Fund (IMF) recently warned that a Brexit could have wide-reaching economic and trade implications.

"Votes by themselves shouldn't be a reason for altering monetary policy," Rosengren said. "If we were experiencing significant changes in financial conditions that made us significantly alter the outlook going forward, that would be something that we should take into account."

While not out of the question, chances of a Fed rate hike in June remain low. Odds of a June interest rate increase jumped to 26% from nearly 0% after the minutes. They now sit at 29%, according the CME's Fed tracking tool.

A Fed rate hike in June or July is closely watched because it will likely determine if we get two rate boosts this year.

When the Fed raised rates for the first time in nearly a decade in December 2015, the central bank penciled in four rate hikes in 2016. But after a mix of extreme stock market volatility, a global economic slowdown, and falling oil prices, the Fed trimmed the number of likely rate hikes this year to two from four.

But lifting interest rates now could wreak havoc on the markets. You see, U.S. corporate earnings are falling, manufacturing is stagnant, stock and bond valuations are high, and GDP is soft. Under similar conditions, the S&P 500 dropped 9.2% during the month following the Fed's rate hike in December.

Right now, it's easier for the Fed to talk about hiking interest rates than it is to actually implement one.

Money Morning Global Credit Strategist Michael E. Lewitt says his money is still on a single rate hike later this year and no move in June.