Recently, I told you I was working on a special world currency report, with profit recommendations for a large basket of currencies.

There's so much information here, I've decided to break it into a two-part series.

The simplest way to do this is to start with the Big Five. These major currencies serve as the "drivers" for the minor ones. In my upcoming Part 2, I'll tell you which of the minor currencies (like the Aussie dollar or the Swiss franc) are tied to which of the major ones, how that impacts their direction, and how you can profit.

Right now, we'll start with profit recommendations for the five major currencies that drive all the rest. 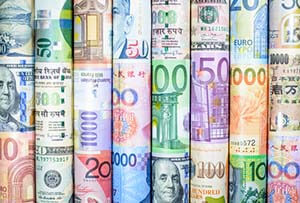 The five currencies fueling the world economy right now are GOLD-USD-EURO-YUAN-YEN, in that order. (Gold, as I've written many times before, is a currency, not a commodity.) Everyone else is a minor player.

Keep in mind that no currency is an island unto itself. They do not operate in isolation. In a very long view, central banks will eventually destroy the value of paper money and gold will be the only currency left standing. Until then, some of these currencies will go up and others will go down, in an interconnected domino effect. (More on that in Part 2.)

Of these five currencies, gold and the dollar are going up, and are likely to continue doing so for some time. The euro, the yen, and the yuan are going down.

Here's how to profit from each one.

As always, puts are my preferred trade as a less risky way to play the short side.

There are a number of ways to own gold. The best way is to own physical gold, and I like coins, which can be purchased from a number of reputable dealers.

The dealers I like personally are Kitco, Blanchard, and JM Bullion. These firms offer a wide variety of newly minted coins, historical coins, and rare coins, as well as coins from different countries, such as American Gold Eagles, which are my favorite, South African Krugerrands, and Canadian Maple Leafs. You can choose from different weights, ranging from 1 oz down to 1/10th oz (and Kitco even offers 1/20th oz).

There are also two other stocks that I prefer, the Central Fund of Canada Ltd. (NYSEMKT: CEF) and the Sprott Physical Gold Trust (NYSE Arca: PHYS).

U.S. Federal Reserve Chair Janet Yellen as well as European Central Bank President Mario Draghi and Bank of Japan Governor Haruhiko Kuroda have publicly stated that they want inflation to rise. That means that they want the value of paper money to fall. While official inflation statistics say that inflation is low, real-world prices are rising quickly. These central bankers are completely failing in stimulating economic growth, but they are succeeding in destroying the value of paper money.

You can buy ProShares DB U.S. Dollar Bullish ETF (NYSE Arca: UUP), which closely tracks the exposures in the DXY. This ETF rises when the dollar rises.

The Dollar Index (DXY) broke out of a long-term trading range and started moving up sharply in mid-2014 until it broke a long-term trend line at 95 in December 2014. It has spent most of the subsequent period trading above this key level, signaling that it could trade much higher in the coming months.

Keep an eye on the DXY. As of Q2 2016, it's above 95 and likely to move higher, which would have massive deflationary consequences for global markets.

While the Fed has ended quantitative easing and began raising interest rates at the end of 2015, the ECB and the Bank of Japan are moving in the opposite direction, initiating huge new bond-buying programs to lower interest rates in their markets. That means Europe and Japan are dead set on cheapening their currencies against the dollar. As a result, the U.S. dollar will keep rising as global investors flee lower-yielding currencies and flock to the higher-yielding U.S. currency. That should push the dollar upward and further depress the euro and yen.

You can sell short the Euro by buying ProShares Short Euro ETF (NYSE Arca: EUFX). This ETF rises when the Euro falls.

In mid‐2014, the euro (as well as the yen and other currencies) began to fall against the dollar as U.S. monetary policy began to diverge from those of other major central banks in Europe, Japan, and elsewhere. The Federal Reserve ended quantitative easing in October 2014. In contrast, the Bank of Japan and European Central Bank were about to double down on their versions of this doomed‐to‐fail policy, which they did in October 2014 and January 2015, respectively. They continued these efforts in 2016.

The euro is likely to continue falling against the dollar.

Second, they can short the Chinese stock market by shorting the iShares China Large-Cap ETF (NYSE Arca: FXI), which has traded between $52.85 and $28.81 over the last year and is currently at $30.20.

Right now, China is facing serious pressure to devalue the yuan. China's economy hit a wall in mid-2014 and since then, about $1 trillion of capital has left the country. The country's $4 trillion of foreign exchange reserves has dropped to nearly $3.3 trillion as the authorities have spent hundreds of billions of dollars defending the currency. Of its remaining reserves, only about half are liquid, so it can't continue to spend money at the rate it has to keep defending the yuan.

China is either going to have to impose stricter capital controls to keep money from leaving or stop spending its reserves to defend the yuan. If it imposes capital controls, wealthy people in China will get even more nervous about moving their money out of the country and redouble their efforts to do so. Such a move would also be a blow to the Chinese view of itself as a global economic leader, but it may not have a choice. Either way, the yuan could move much lower than people expect.

But contrary to the opinions of many "experts" like Kyle Bass, China's collapse will be a long, slow slide to oblivion, not a spectacular crash. The yuan is undoubtedly overvalued and will decline in value over time, but as tempting as it is to imagine a Chinese collapse, it simply isn't going to happen quickly.

Second, they can short the Chinese stock market by shorting iShares China Large-Cap ETF (NYSE Arca: FXI), which has traded between $52.85 and $28.81 over the last year and is currently at $30.20.

Japan's government has no choice but to continue to weaken the yen in order to deal with the country's terminal debt and demographic challenges. A cheaper yen will boost Japan's export businesses. In addition, Japan's corporations have become very competitive globally as a result of having to operate with an expensive currency for so many years. As a result, they are poised to generate strong profits if they can sell more of their goods under a weak currency regime. The yen is likely to decline more rapidly than the yuan despite the yen's recent strength (and clearly that isn't a speedy trade in itself). The yen has been a big disappointment to those (myself included) expecting it to drop against the U.S. dollar this year as a result of Japan's increasingly desperate efforts to weaken its currency and stimulate economic growth. Despite unprecedented efforts to ease monetary policy, the yen surged to an 18-month high by mid-April against the U.S. dollar. Not to be deterred, the Bank of Japan said it "will not hesitate to take additional easing measures in terms of...quantity, quality, and the interest rate if it is judged necessary."

I would maintain short yen positions, however, because the Japanese will continue their efforts to debauch their way out of insolvency. Their efforts won't work, but they won't stop trying.

Stay tuned for Phase 2 of this report, where I'll explain how these major currencies pressure the minor ones - and how you can profit from those.

Thanks for the insight????Can you give me an idea how much gold one should buy to protect there investments in percentage amounts ?