The silver price saw a huge rally late last week thanks to arguably the biggest referendum in European history.

By now, you know the Brexit vote is over and Britons have chosen to leave the EU.

And the reaction was a classic "risk off/safety on" trade. Worldwide stock markets tanked, while the U.S. dollar, gold, and silver prices rose sharply.

I admit I was surprised. I thought the "Remain" side would win, even if by a slim margin. I expected Britons to stay with the status quo to avoid "rocking the boat." Many are already saying they regret voting to leave.

As a result, British Prime Minister David Cameron promised to resign in October. But something interesting happened, especially with regards to European stocks.

Here's how the FTSE, DAX, and CAC 40 - the respective benchmarks of the UK, Germany, and France - looked by the close on Friday...

You'll notice the FTSE sold off by a massive 10% after the open but ended the day down "only" about 3%. By contrast, German and French stocks were still down by about 7% and 8%, respectively, as the end of the trading day neared.

What that tells me is Europe feels it has more to lose from Britain leaving the EU than does Britain itself. Of course, the currencies reacted in the opposite direction, with the pound sterling down against the dollar and the euro.

But the bottom line is gold and silver did their job, providing shelter as safe-haven assets while the more traditional risk assets took it on the chin.

How the Silver Price Performed Before and After the Brexit

As the polls from the Brexit vote started pouring in on Wednesday, silver prices were mostly static throughout the day. The results pointed to a small but likely win for the "Remain" side, which sent the silver price down only 0.2% to $17.22.

But it wasn't until Thursday night that serious silver price action began...

Silver prices soared into late Thursday night as the official Brexit vote results started to roll in. By midnight, the metal had surged 2.1% to reach $17.60.

And during those five trading days, here's how the U.S. Dollar Index performed... 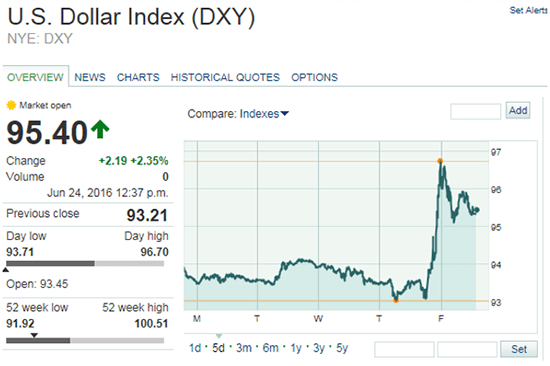 It's uncanny how this chart resembles that of the silver price over the same time... 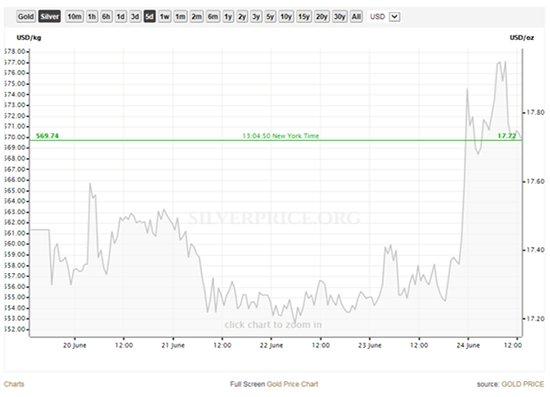 Much like the price of gold, I expect silver will back off in the weeks ahead as markets realize that Britain leaving the EU isn't the geopolitical crisis it was made out to be.

Despite possible volatility ahead, the Brexit aftermath doesn't diminish the potential for stronger silver prices this year and beyond...

Here's What Will Drive the Silver Price Higher in 2016

I'm confident in silver's long-term performance because I constantly look at the fundamentals. And what they're telling me right now is that the price of silver's future looks bright.

The technical indicators look bright as well. Even before the Brexit vote, silver managed to remain well above its 50-day moving average of $16.97. That's a feat gold prices only barely managed to pull off.

On the fundamental side, the biggest factor to watch is coin sales, which are growing at a rapid pace.

The U.S. Mint is seeing a lot of ongoing physical demand. In the first five months of this year, U.S. silver demand is up by 40% over the same period in 2015.

Naturally, the Mint has had to increase its weekly allocation of American Eagle silver coins in a big way. The previous weekly number of coins available was 1 million. That has just more than doubled, popping to 2.2 million this past week.

Furthermore, a report by research firm Transparency Market Research forecasts massive growth in the market for nanosilver. Sales of these tiny silver particles used in healthcare, electronics, and a host of other applications will soar from $700 million to $2.4 billion within just seven years.

And I also expect silver supply to remain tight for at least the next few years. In my view, the result is going to be much higher silver prices.