Although the Brexit vote has spawned countless dire predictions about the fate of the UK once it exits the European Union, common sense suggests the reality won't be nearly so apocalyptic.

Yes, that's despite the 3% drop in the U.S. stock markets Friday and much steeper declines in stock markets elsewhere, particularly in Japan (8%) and Germany (6.8%). The British pound sterling fell more than 10% against the U.S. dollar. 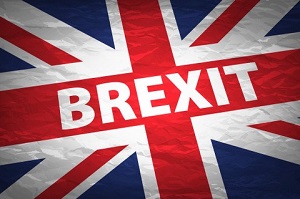 The market turmoil continued Monday, with U.S. stocks declining about 2%. Meanwhile, both the Standard & Poor's and Fitch credit agencies stripped the UK of its perfect AAA rating.

The forces that favored the UK remaining in the EU have used this as an "I told you so" moment. All along the opponents of Brexit have warned that leaving the embrace of the EU would cripple the UK economy and trigger a global recession.

Here's what the doomsayers claim will happen in the wake of the Brexit vote:

But it's unlikely investors were looking that far ahead. None of those things will happen for at least two years, the period allowed for a nation to negotiate its withdrawal from the EU.

Instead, the markets reacted to the Brexit shock – virtually no one expected it. Much of what's happening in the markets now is due to uncertainty over how things will play out. When the smoke clears, the markets will settle down.

"After these disruptions, the markets will smooth themselves out after a couple of months," said Money Morning Capital Wave Strategist Shah Gilani, adding that he believes the consequences of the Brexit results will be minimal.

You see, the UK has several key advantages that will prevent the sort of economic catastrophe so many have predicted…

First of all, remember that the UK never surrendered its currency, the pound sterling, in favor of the euro. Not sharing the common currency makes a Brexit simpler by several orders of magnitude.

This is important not just for assessing the strength of a UK economy in a post-Brexit world, but in showing just how much leverage the UK will have in future trade negotiations with the EU.

Plus, the current trade relationship shows the UK in the dominant position with most members. Ireland, Poland, Italy, Portugal, Spain, and even France all export more to the UK than they import from the UK. 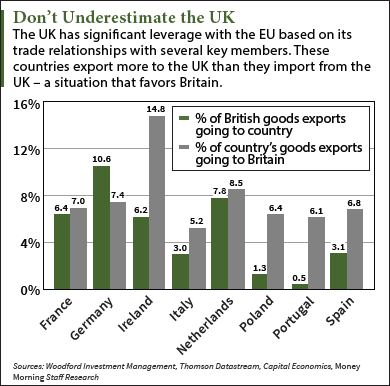 So don't be fooled by some of the belligerent talk coming from some EU leaders now about being tough on the UK.

"Given the scale of trade interdependence between the United Kingdom and the European Union's members, and the advantages of maintaining a close commercial arrangement, there would be little to be gained on either side from hostile trade relations after Brexit," noted a February report on the impact of a Brexit by UK firm Woodford Investment Management LLP.

As the shock of the Brexit vote wears off, expect cooler heads to prevail and a mutually beneficial deal to be made.

Even if the EU tries to take a tough line to make an example of Britain to discourage any more exits, bilateral trade would fall under the World Trade Organization's "most favored nation" rules. In that scenario, the UK would pay tariffs in the neighborhood of 4% — hardly a backbreaker.

Apart from that, the UK has history on its side. After all, Great Britain virtually invented free trade in the 19th century and has been a major player in global commerce for centuries. It doesn't need the EU to forge trade relationships.

In many ways, the UK is actually better off without the EU when it comes to trade…

How the UK Will Benefit from Brexit

No longer subject to the EU's rules, Britain will be free to make its own trade deals – including with nations of little interest to the EU. The UK is prohibited from doing that now.

With the EU shrinking in importance – its portion of the global GDP has dropped from 24% to 17% since 2000 – the UK will benefit from a de-emphasis on Europe in favor of a more globalized trade policy.

With what the UK has to offer, that won't be that difficult. Already the Obama administration is backtracking on threats to send the UK "to the back of the queue" in the event of a Brexit.

"It is, I think, very much in the interest of all parties to maintain open trade relationships. The U.S. and the UK have a special, deep relationship that will continue," U.S. Treasury Secretary Jack Lew told CNBC.

And don't forget the 53 nations of the Commonwealth (combined population of 2.2 billion). Unshackled from the EU, Britain has the leeway to forge more free-trade agreements among these countries, which include Canada, Australia, Kenya, Nigeria, Malaysia, Pakistan, and India.

Likewise, the damage to London as a global financial center is likely to be minimal. The City's centuries of tradition, heavy concentration of legal and financial expertise, and ideal time zone (sandwiched between the working days of Asia and New York) aren't easily duplicated by would-be rivals Paris and Frankfurt.

No doubt some business would leave for the continent, but the UK's new worldwide focus would open up fresh opportunities for exporting financial services to Asia and emerging markets.

The same goes for fears of a steep decline in foreign investment. The Woodford report notes that Britain is attractive for more than just EU access. Such factors as ease in attaining credit, a stable political environment, and a robust transportation network will ensure a minimal drop in foreign investment in the UK post-Brexit.

Gilani argues the Brexit will free up the Bank of England to make policy that would do more than just beat back recessions.

"Brexit means a different interest rate policy prescription for Great Britain and not being subjected to the wet blanket thrown over the EU by the ECB [European Central bank]," said Gilani, who has dual U.S.-UK citizenship.

"If the Bank of England gets it right and tells the politicians it's not going to do their job and that they have to execute fiscal policies to spur growth, then the UK economy can become the first giant economy to turn back the clock on economic oppression exercised by banks and their central bank fixers," Gilani said. "They could actually reinvigorate the free market, awaken the animal spirits and pave the way for the rest of the world to free themselves from the yoke of central bank oppression."

How to Deal with Brexit: When an event as unexpected as Brexit happens, investors understandably get anxious about how they should react. Selling in a panic is always a bad idea, but you still need some kind of strategy. Money Morning Chief Investment Strategist Keith Fitz-Gerald has all the answers to your questions and concerns. To get Keith's expert advice, just watch this free video…