The reason: the 2016 presidential election…

The median estimate from economists surveyed by NABE calls for gross domestic product (GDP) growth of just 1.8% in 2016. That's down from their previous estimate of 2.2% in March. Of the economists surveyed, 57% said uncertainty over the election prompted them to lower their expectations. 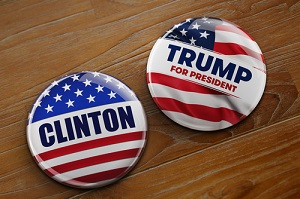 For an expert opinion on how the 2016 presidential election will impact stock markets, Money Morning turned to Steven Pressman, Professor of Economics at Colorado State University and editor of the Review of Political Economy.

Fresh off a UK book tour, Pressman said worldwide interest in this year's presidential election has been stoked by the large personalities and headlines from presumptive GOP candidate Donald Trump and Democratic candidate Hillary Clinton.

Here's how Pressman sees the markets reacting to the 2016 presidential election, along with what sectors will thrive and sputter under each candidate.

How the Markets Will React to the 2016 Presidential Election

Markets hate uncertainty. So according to Pressman, as long as there aren't any recounts or mishaps following the election on Nov. 8, political uncertainty will be significantly reduced. And that means stock markets should breathe a sigh of relief.

Pressman points out that stocks historically outperform with a Democrat in the White House – a 9.7% annual return compared to a 6.7% annual return with a Republican. One factor responsible for this may be the better economic growth under Democratic presidents (1.8% annually).

But things are very different for bond markets…

"Trump has talked about large tax cuts for everyone without specifying where he plans to get the money to do this," Pressman said. "He has also pledged to build a huge wall between the U.S. and Mexico. While he promises Mexico will pay for the wall, the only way this can happen is indirectly –  through tariffs on goods coming to the U.S. from Mexico that will then be used to pay for constructing the wall."

The result is that costs of imported goods will rise immediately, while revenue will trickle in over many years. In the meantime, money will have to be borrowed by printing and selling bonds. That will push down bond prices.

Now, check out the real impact super PACs are having on the 2016 presidential election in the above video.

"Making things even worse, Trump has talked about renegotiating U.S. debt," Pressman said. "That means U.S. government bond holders would get paid less. It is hard to see the bond market doing well at the end of this year with President Trump coming in 2017."

As for a President Clinton in 2017, bond markets will simply be relieved there won't be a President Trump. Debt markets won't have to worry about the possibility of defaults or write-downs.

Which Sectors Will Thrive Following the 2016 Presidential Election

Trump will undoubtedly be "great" for the energy sector including oil, natural gas, and especially coal.

"Trump has consistently complained about U.S. dependence on foreign energy," Pressman said. "He will likely support greater domestic production any way he can and seek to impose trade restrictions on foreign energy sources. The net beneficiary will be U.S. energy firms, which will be able to produce and sell more."

Another beneficiary in a Trump win will be the construction industry.

"Think lots of jobs and profits from that promised wall between the U.S. and Mexico," Pressman quipped.

Meanwhile, a Clinton presidency would be good for the agricultural sector.

"Mainly because Trump would be so bad for agriculture," Pressman explained. "If Trump cracks down on immigration, U.S. agricultural firms, with their heavily immigrant concentrated workforce, will be the main loser."

Sectors likely helped by a Clinton presidency are education and small business.

And while some sectors will outperform based on who wins the 2016 presidential election, there are also major risks that come with each candidate…

The Biggest Risks with Each Candidate

Regardless of who is elected president in November, Pressman says the American economy is facing the risk of recession.
"I would put the odds of a recession at close to 50-50 in the next year or two," he said. "Economic growth has been sluggish for several years now (around 2%) and many of the problems that led to the Great Recession have not been remedied. Inequality remains high, household debt remains a big problem, and financial institutions are still too big to fail. Add in higher interest rates, slower growth outside the U.S., and business uncertainty about future growth, and we have a recipe for recession."

A big threat from a President Clinton is that she will favor Wall Street and large financial institutions, leading them to speculate more. Another threat is that taxes on the wealthy will go up too soon and by too much before middle-class tax cuts kick in to increase consumption. This would push the economy into recession," Pressman said.

The biggest risk from a President Trump is that he will try to do something "really dumb" like trying to renegotiate U.S. debt. Pressman believes that would sharply push U.S. government borrowing costs higher.

Another threat from a Trump win is a trade war…

"Trump is correct that the U.S. $500 billion to $600 billion trade deficit represents the loss of jobs and a lot of income in the U.S.," Pressman said. "Ending this trade deficit would provide a huge boost to the U.S. economy. But any action taken by a President Trump will likely lead to an opposite and equal reaction. We will lose sales abroad at the same time that foreign-made goods are more expensive in the U.S. due to tariffs that President Trump imposes and/or the pressure he puts on other countries to appreciate their currency. It is unlikely that domestic production would be able to pick up quickly."

Like a Clinton tax shift, the U.S. economy can easily experience a negative shock from a trade war. That would lead to a recession.

While the 2016 presidential election will undoubtedly impact the stock markets, it will also have a major impact on the U.S. Federal Reserve and Chair Janet Yellen…

What a Trump Presidency Means for Team Yellen

Trump said he isn't likely to reappoint Janet Yellen to another term as Fed chair when her current term ends on Feb. 2, 2018.

Still, there is a relatively long history of presidents reappointing the current head of the Federal Reserve. President Obama reappointed Ben Bernanke, President Clinton reappointed Alan Greenspan twice (once when he had a Democrat serving as vice chair and ready to take over). And President Reagan reappointed Paul Volcker.

"Of course, President Trump would love to break with history and do something different," Pressman said. "However, he faces a dilemma. He's on record as wanting to appoint a Republican to head the Fed, yet he has also said he thinks Yellen is doing a good job. More importantly, he strongly supports her policy of keeping interest rates low. It is hard to think of anyone, Democrat or Republican, more dovish on interest rates than Yellen. Almost any Republican that President Trump might select to replace Yellen would be considerably more hawkish and likely to raise interest rates faster and higher (thus putting the economy and Trump's re-election hopes in jeopardy)."

But the most important question Americans and investors are asking is who will win the 2016 presidential election. Here's Pressman's take…

Who Will Win the 2016 Presidential Election

It's hard to envision Trump as the next U.S. president, Pressman shared.

"Donald Trump has alienated far too many people with his bullying and his negative comments about women, minorities, and foreigners" Pressman said.

"Too many Republicans are not supporting him, including the former Bush presidents, former NJ Gov. Christine Todd Whitman, Ohio Gov. John Kasich, Mitt Romney, Michigan Gov. Ric Snyder, and New Mexico Gov. Susana Martinez. Ohio Sen. Rob Portman and Kasich have even said they may not attend the Republican convention in Cleveland, Ohio, in July."

And Democrats are likely to unite against a possible Trump presidency.

"In past situations like this, the united party invariably wins and generally wins by a large margin," Pressman said. "This was true in 1968 when anti-war Democrats didn't support Hubert Humphrey and even in 2008 when many Republicans abandoned their party because Sarah Palin was on the ticket."

Finally, the Electoral College favors Democrats. They'll start out with 240-250 of the 270 electoral votes necessary to win the presidency.

"Republicans need to win virtually all the swing states, including Ohio, where two prominent Republican officials have serious concerns about Trump, to reach 270," Pressman said, "Several polls indicate that Trump may be in trouble in a few Republican states (such as Arizona, where the Hispanic vote is running strongly against Trump) that he should win handily if he is going to win the November election. If Trump has to defend states like Arizona, he will have fewer resources to put into swing states or in trying to steal a traditional blue state to reach 270."

Yet Trump does have one key advantage, Pressman notes. "People are voting for outsiders, for people who are not part of the system. That's Trump's true edge."