The cannabis market is growing rapidly and 2016 will be a defining year for the industry. That means investing in marijuana is one of the best ways to profit this year.

And there's one declining government program that will help the medical marijuana market grow over the long term.

First, here's why the marijuana industry is on its way to becoming a $21.8 billion market by 2020…

How the Movement Toward Legalization Will Boost Investing in Marijuana 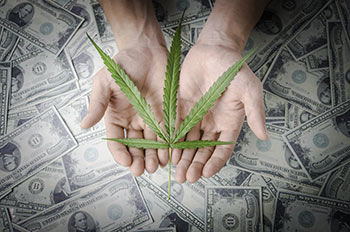 The biggest reason why investing in marijuana will yield profits this year is the nationwide movement to allow cannabis use.

Back in May, the Vermont House of Representatives voted against the Senate's plan to legalize, tax, and regulate marijuana. But the state may hold a public referendum in August for citizens to vote on legalization. Four states and Washington, D.C., have legalized cannabis via referendum.

Earlier this year, Ohio and Pennsylvania passed laws allowing for therapeutic marijuana use. That brings the number of states legally allowing cannabis use to 25, along with Washington, D.C.

The growing number of states legalizing pot brings with it an increase in sales and tax revenue, which will make investing in marijuana more attractive.

In just four years, the U.S. marijuana industry is expected to generate $21.8 billion in annual sales. That's 72% higher than the National Football League's revenue in 2015.

These projections are impressive to anyone thinking about investing in marijuana. But they're even more impressive considering the first recreational dispensaries opened in Colorado only two years ago…

According to Colorado Pot Guide, cannabis purchases in the state average 121.4 tons per year. The most recent data shows there are more than 2,500 marijuana business licenses across the state, with more than 900 of them for dispensaries. That means Colorado has more cannabis business licenses than Starbucks Corp. (Nasdaq: SBUX), McDonald's Corp. (NYSE: MCD), and 7-Eleven locations combined.

That's because American adults prefer medical marijuana over this federal program, which saw $619 billion in spending two years ago…

This Declining Federal Program Will Make Investing in Marijuana Profitable

Americans are starting to spend healthcare money on marijuana rather than Medicare.

According to health journal Health Affairs, states that legalized medical marijuana saw a dip in Medicare prescriptions for drugs used to treat chronic pain, anxiety, and depression. They also saw declines in spending on Medicare Part D, which covers the cost of prescription drugs.

Since cannabis is often used to treat pain and depression, researchers said it's likely legalization in these states led to a drop in Medicare spending. They noted medical marijuana saved about $165 million in the program's spending in 2013. If pot were legal nationwide, Medicare Part D spending would have declined in the same year by $470 million. That's about half a percent of the program's total expenditures.

As the marijuana market and medical uses for cannabidiol continue to grow, big investment opportunities will open up.

Money Morning will be providing constant coverage of the marijuana market. Later this summer, we'll also provide a list of the best marijuana stocks to buy, so be sure to stay tuned.