What's the difference between the WTI and Brent crude oil price? It's a common question that few retail investors can thoroughly answer. 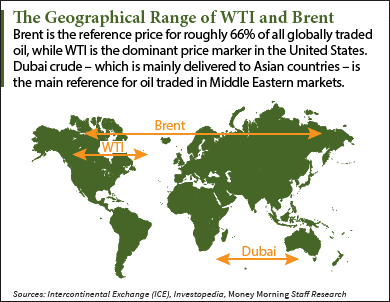 The most obvious answer is that WTI - which stands for West Texas Intermediate - is the benchmark for oil futures contracts traded on the New York Mercantile Exchange. In other words, WTI crude oil is the base reference price for any oil traded in the United States.

On the other hand, Brent is the most commonly used price reference in the world. Intercontinental Exchange Inc. (NYSE: ICE), which operates U.S. commodity exchanges, says about two-thirds of all crude oil futures contracts in the world use Brent as the price marker.

Most investors don't know about the several other differences between the two crude oil price benchmarks. That's why we're going to dive into three of them today.

Before we get to the differences between WTI and Brent, it's important to first understand the most common way they're traded - futures contracts.

What Are Futures Contracts and How Do They Relate to the Crude Oil Price?

The most direct way to invest in crude oil is with futures. These are contracts obligating the buyer to purchase a set quantity of oil at a future date and price. Oil futures contracts are based on speculation because the sellers are required to predict crude oil prices months or even years in advance.

According to FactSet, a WTI oil contract set for delivery in August 2017 trades at $52.25 a barrel as of 8:45 a.m. today (Thursday, July 7). Let's say you buy one of those contracts because you think the crude oil price will zoom past that to $62.25 by that August 2017 delivery date. In other words, you're buying now in hopes of making a $10 profit over the next year.

If you're correct and the WTI crude oil price hits $62.25, you can buy it at that original $52.25 price and immediately sell it back at its current $62.25 price for your $10 profit. If the contract falls below the original price, you lose whatever the difference is between the original and the current price.

As you can see, investing in oil futures is a highly speculative game. And the amount of risk typically depends on whether you're buying WTI or Brent futures. Since Brent is globally traded, it's usually riskier because it's more susceptible to geopolitical events that could affect the flow of supply and spike prices.

But the amount of speculation is just one distinction between WTI and Brent crude oil.

Here are the three biggest differences between these two major benchmarks...

Difference Between WTI and Brent Crude Oil No. 1: Sulfur Content

The most recognizable chemical difference is the amount of sulfur contained in each type of crude oil.

You see, oil's sulfur content and density determines how that oil should be processed into certain products. Oil with high amounts of sulfur is considered "sour" and less desirable than "sweet," light-sulfur oil because sour oil requires a more expensive processing procedure. Similarly, oil with high density is considered "heavy" and less desirable than low-density, "light" oil for the same processing purpose.

Both West Texas Intermediate and Brent oil are classified as light, sweet crude, which is why they're the two most in-demand crude oil price benchmarks in the world. While both have a nearly identical amount of sulfur content, Brent is slightly heavier than WTI.

Difference Between WTI and Brent Crude Oil No. 2: Refining Purposes

Because WTI and Brent have different densities, each is used to make different refined products.

Now, here's the biggest difference between WTI and Brent that affects how each benchmark is traded around the world...

Difference Between WTI and Brent Crude Oil No. 3: Shipping Costs

The different locations in which WTI and Brent are produced affect how much it costs to transport each type of oil.

WTI is extracted from wells in the United States and sent to Cushing, Oklahoma - the central trading hub for the benchmark. Because WTI oil is stored in a landlocked area near the center of the country, it's fairly expensive to transport it overseas since the oil has to travel thousands of miles before even being loaded onto a ship.

Meanwhile, Brent crude oil is a fairly cheap commodity to move overseas. That's because Brent is drilled and produced in the North Sea, which is sandwiched between the UK, Norway, and several other European countries. Since the oil is already out in the middle of the ocean when it's drilled, producers can easily transport it throughout most of Europe for a low cost.

Stay tuned to Money Morning for constant updates on global energy events and major movements in the crude oil price.