The Hazelden Betty Ford Foundation, which ought to know a thing or two about behavioral disorders, once defined insanity as "doing the same thing over and over again and expecting a different result."

By that definition, the world's central bankers - "hopium" pushers to the global markets - are all barking mad.

They've continuously inflated assets to stratospheric heights in a doomed quest for growth and inflation that never, ever comes.

And what's really insane is that they have absolutely no idea how to stop what they're doing... without sending those "hopium"-addicted markets into a lethal tailspin.

They'll get the tailspin anyway. Or should I say, we will - central bankers never lose.

The United States is a perfect example of what central bankers have wrought on the markets.

The Fed Has Less Than Nothing to Show for Its Efforts

All of the low, zero, and net negative interest rates over the past 10 years just helped the U.S. economy register a seasonally adjusted 1.2% annual GDP growth rate in the second quarter.

All this, plus a downward revision of the first quarter's growth rate from 1.1% to 0.8%. 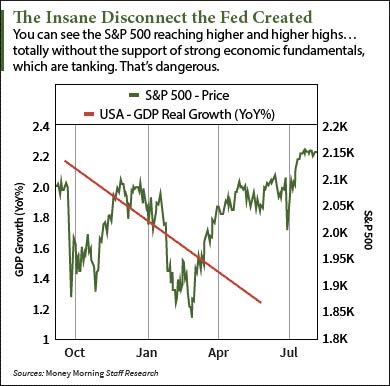 All those cheap, low-interest-rate loans consumers are using to consume "stuff" sure is helping. Personal consumption in the second quarter rose 4.2%. That breaks down to a whopping 6.8% rise for goods and a 3% rise for services.

More than 66% of the U.S. economy is driven by consumption, so on the surface, it's stunningly good to see robust growth in consumption like that. The media likes to shout it from the mountaintops, in fact.

Trouble is, nobody is talking about all the borrowing, at low rates, that's happening to fuel all that consuming.

So why on Earth would anyone borrow and leverage themselves to consume? Well, for one thing, it feels good. It's part of the "wealth effect." The thinking goes like this...

"The stock market looks good, so our investments and retirement accounts must be getting fatter, so let's go spend (okay, borrow and spend) to feel good and do good by helping the economy."

It's not just the American Way, it's the Federal Reserve's Way...

No one's talking about that, either.

And if you think the housing market is bringing up the rear, think again. Residential fixed investment fell a much larger than expected 6.1% in the second quarter.

And the band plays on.

Growth Won't Happen... but Big Short-Side Profits Sure Will

Stocks just made new highs and then fell off. And sure as September follows August, you can bet they'll hit new highs once again. The consensus on the Dow's long-term target is 21,000. It looks impressive, sure, but to me it looks like an awful long way to fall - and I'm going to be in position to profit when it does.

It's just one giant, happy, free-for-all concert. "As long as the music's playing, you've got to get up and dance."

But all is not right with the U.S. market... with global markets... with oil... with commodities... and most definitely with almost $15 trillion worth of government bonds bid up so high their yields are negative.

The growth isn't here and it isn't coming. You can bank on that.

Sure, "the trend is your friend" and you ride it as long as you can. But when financial assets get so pumped up on the tune being played by central banks, it's all going to give way at some point.

Ladies and gentlemen, we're getting close to the "when" point.

The biggest reason the market here is so high is that cheap money is being borrowed by corporations to buy back their own shares, inflating their earnings per share metrics without increasing earnings.

The list of companies buying back record amounts of stock is increasing -- at the height of the market, no less! They're buying their own stock on its highs!

Are you kidding me?

We're going to make a killing when those idiots (and believe me, I have a good, long list of who they are) get caught out when the music stops. Investors will realize they've burned through trillions of dollars in cash and loaded their balance sheets with debt.

Not even the Federal Reserve will be able to help them. It's coming.

Take luxury goods makers, for example. Their earnings are getting hit everywhere, but their stocks aren't just holding up, they're going up. Let's see... slowing worldwide economic growth... falling earnings... and yet their stocks are rising. Something smells!

The easiest way to make money when this whole racket collapses is to take a position in ProShares Short S&P 500 ETF (NYSE Arca: SH). But there are ways to make even more potential gains, too...

In my Short-Side Fortunes trading service, for instance, we're heading back into my nice, long list of pumped-up stocks that are ready to burst and shorting them.

We're already loading up on one, Tesla, the luxury electric car manufacturer that doesn't have enough money to build the cars it has orders for and will have to borrow, yep, borrow, another $10 billion in the next five years.

Good grief... China's been off the radar because of everything else going on in the world. But it's sinking, and it's sinking fast.

The latest evidence of the troubles there has everything to do with their "wealth management products," which were supposed to create wealth, but are now a $3.5 trillion bomb about to blow huge chunks of the Chinese economy to smithereens.

Enjoy the up-trend boys and girls, it's got a little ways to go yet.

But the music is going to stop... Be ready when it does.

Maybe we can focus on the shorter term, articles that state the market will go down someday aren't terribly helpful. Anyone with half a brain understands what's going on with the fed and the markets. Articles like this has been circulating for years now. While I am drooling to play the short side that opportunity hasn't come yet except for the beginning of this year. How did that work out?

When the big correction happens, where will the price of oil and natural gas go?

I can't wait for the crash !

The name of the game is change and change is occurring so rapidly, it is mind-boggling.

All this change is good for our economy and the stock markets.

I think they are going to go even higher for at least the next two years or so.

Our economy shows strong underlying strength. Gross Domestic Product (GDP) has been positive, despite the dismal performance in recent quarters, which is not to be seen in a negative light. Slow, steady growth has been the right government policy to embrace coming out of a deep recession in 2008. The U.S. has enjoyed eight years of continuous recovery and fortunately, the end is not in sight.

Hey Shah, isn't this recovery unprecedented? When has the U.S. enjoyed this long a recovery? If the next administration focusses on increasing domestic manufacturing and improving infrastructure (fixing roads, bridges, etc), our economy is going to take off. And shale oil exports will provide more jobs and improve our balance of trade. Things cannot look any brighter for the U.S. American companies are the leaders in the digital and cloud computing industries. This is another bright spot.

The U.S. A is the one bright shining light in the world. It is the world leader. Coming out of the 2008 global recession, it has become the strongest and most powerful country in the world. China led the world out of recession, now it's U.S. turn to lead the world to normalization. It can only do that by remaining strong internally. It is a paradox, but by self-interest the U.S. helps other countries until they themselves can get back on their own feet.

In all my life, I have never ever felt more comfortable investing in the stock market. Of course, I am hedging by buying gold and silver stocks, in the event the market tanks, but the way things going the U.S. stock market is the place to park your money.