I got my introduction to the world of wealth management while working for Gannett Newspapers in Rochester, New York. I've watched wealthy investors constantly ever since, because what I saw at the time was absolutely fascinating.

You see, Rochester has more than its fair share of "old money" families - that's largely thanks to local companies like Eastman Kodak Co. (NYSE: KODK), Xerox Corp. (NYSE: XRX), Bausch & Lomb Inc. and, much later, Paychex Inc. (Nasdaq: PAYX). These companies grew so large that they made huge swathes of the population filthy, stinkin' rich.

Now, certainly, none of these families obtained their fabulous wealth by simply being in the same ZIP code as these successful companies.

Instead, as I came to find out, they travelled a path of sorts, using a "wealthy investor" strategy with a shared mindset that led to more frequent success, greater gains, and more substantial wealth over the long term.

And that is precisely what I'm going to talk to you about today. And I'll go one better - I'll give you a "new money" stock that can help make you "old money" rich.

Attaining this kind of wealth is a lot easier than you might think...

This Group Can Teach Anyone to Invest Successfully

Like I said, I've been into investing and wealth management for years now. 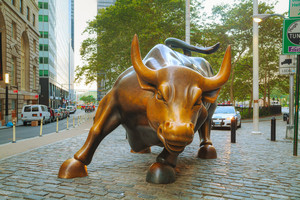 And of all the things I learned, one lesson trumps all the others.

Wealthy investors invest differently than everyone else.

To be sure, because of their high net worths, these folks get more attention than other investors. They get preferential treatment, meaning they get access to better deals (like "private placements" or the hottest initial public offerings).

But, as a group, wealthy investors also manifest some tendencies that make them more successful.

To really drive this home, I want to share some comments made by Mark Haefele, who's been the worldwide chief investment officer of UBS Wealth Management Americas for about two years.

This is likely some of the most valuable insight you'll ever get.

Look for the Best Long-Term Opportunities

The dark-haired, bespectacled Haefele is very soft-spoken. But his insights are powerful.

I've been watching him for some time. And I find that I usually like what he has to say.

Take an interview he gave to Penta, the Barron's investment magazine aimed at wealthy folks.

Wealthy families, you see, have a "competitive advantage" over other investors - both public and private, Haefele told Penta.

It's not surprising when you think about it...

As a group, they're more patient, tend to be more focused on long-term results. And so they gravitate toward long-term trends - those with the biggest payoff potential.

Infrastructure, technology, the aging population... each of those are long-term trends that offer up some of the biggest profit opportunities.

There's an elite group of 7,524 millionaires and billionaires - the Frontrunners - whose investing habits regularly help boost the price of small stocks by as much as 300%, 1,135%, and $1,400 in just a few months.

Bill has studied these heavy-hitters for years, analyzing their investment patterns and activities. He's put his findings together into one killer investment approach: the Frontrunners Strategy. Click here for his research...

In a recent interview on CNBC, Haefele even said that he likes China - a sentiment you won't find much on the markets right now.

Everyone hates China right now - I mean, wouldn't touch it for anything... is more than willing to throw away any investments related to the Red Dragon. But, long term, China's emergence will continue. And that emergence will create wealth - massive wealth.

And that means China still has the potential to make investors massively wealthy one day.

But right now we're going to combine this "investing secret of the wealthy" with our "Frontrunners" strategy - and give you one stock that meets both requirements.

It's a stock we're predicting will double your money over the next few years.

This Is the Ultimate Long-Term "Big Trend" Stock

The company is Facebook Inc. (Nasdaq: FB). Facebook is up nearly 83% since Capital Wave Forecast Editor Shah Gilani recommended the social media giant to us at $68.59 a share back in February 2014 - warning that the stock "will never be this cheap again."

In fact, we were so confident in our assessment of Facebook that we've re-recommended it over and over again. 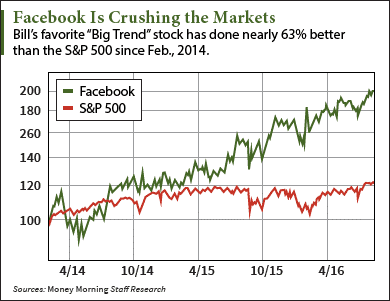 Many folks are scared to buy it - waiting, instead, for a "better time," for it to "get cheaper."

Don't make that mistake. It's not happening.

And I mean plenty. In a recent investor briefing, I told my subscribers that Facebook could hit $250 in the next few years, nearly twice its current price of $125.30.

The company just beat Wall Street estimates for revenue and profits, driving the stock even higher.

But it's the long-term stuff - the "big trends" Facebook is working on - that really makes this a "wealthy investor's" stock. It's a social media play, for sure, as well as a digital advertising play.

But not long ago, stories emerged that Facebook's new open-source networking gear has made its way into the telecom market. That makes it a direct play on 5G technology - which, as we've repeatedly said here, is the next big capital-investment cycle in wireless communications. (Indeed, as Fortune reported, this is part of a major Facebook plan to break into - and shake up - the "dull world of telecoms.")

What's more, it's perhaps the perfect way to play the next big trend in technology: virtual reality.

Even with a slower than expected start, researcher SuperData recently said that sales will accelerate and achieve totals of $22.86 billion by 2019 and $40.26 billion by 2020, particularly as new software becomes available.

Going forward, part of Facebook's power will be derived from its move into virtual reality, a move triggered by its $2 billion purchase of Oculus VR (maker of the Oculus Rift headset) back in March 2014.

Last fall, Vanity Fair - no tilter at windmills - published a story about Facebook's VR efforts. The headline: "Why Facebook's $2 Billion Bet on Oculus Rift Might One Day Connect Everyone on Earth."

And in a brand-new interview with Bloomberg, Facebook CEO Mark Zuckerberg said "this is early, and it's going to be a long-term thing. This is a good candidate to be the next major computing platform. It's worthy of a lot of investment over a long period."

Oculus (Latin for "eye") went on sale earlier this year. Initially, Zuckerberg says this VR device will be a big boost for gamers. From there, the potential gets pretty heady - including watching sports, making movies, joining conversations around the world... and other uses we've not even seen yet.

With all the things Facebook has going on, I'm going to urge you to think of this company in a new way.

Consider it an "infrastructure play" - digital infrastructure - just like General Electric Co. (NYSE: GE), another long-term favorite of ours.

And remember: UBS' Haefele says that "technology" and "infrastructure" - with a focus on big trends and a willingness to focus on the long term - is the bailiwick of wealthy investors.

And if that wasn't enough, Facebook is also a "Frontrunners" stock...

What Wall Street Doesn't Get, This Frontrunner Does

John Wilson is the managing director of Columbia Threadneedle - an asset manager with $460 billion under its control. He's also the senior portfolio manager of the Columbia Large Cap Growth Fund (MUTF: LEGAX).

In other words, he's an associate member of the "Legal Frontrunner's Club" - the hedge fund folks and asset managers who often zero in on the best long-term wealth plays.

And in the most recent issue of Barron's, in a report titled "Long-Term Thinker in a Short-Term Market," Wilson said that Wall Street's focus on the near term causes investors to think the same way.

The real issue: Wall Street's quarter-to-quarter obsession creates a manic focus on near-term results - which is why most investors miss the long-term trends that could make them rich.

"We try to focus heavily on new-product pipelines, whether it's in biotechnology or technology, where the Street's estimates might not be properly modeled," Wilson told Barron's.

And his favorite stock?

While the sell-siders who follow this company zero in on its ability to bring in advertising revenue from its main Facebook site and from Instagram, he says "the crowd" is missing the big picture... the real story... the long-term stuff the company is working on that will be so incredibly powerful.

This crowd is overlooking the company's potential to generate hefty revenue from its messaging platforms - Messenger and WhatsApp. And that's just for starters.

"Facebook has [always] been strong in monetizing traffic, both on the core site and more recently on Instagram" - and there's no reason to believe that won't continue on all the new technologies the company is developing, Wilson said. "So we can envision several potential drivers to lift current Street forecasts higher."

A bit of "Wall Street speak," to be sure.

But here's what Wilson is saying.

In the intermediate term, Instagram, which right now generates $1 billion in revenue, could see that stream triple - a possibility analysts aren't even considering right now. Facebook Messenger - which had 900 million monthly users back in April, and more now - is still a largely untapped resource. And then there's all the other projects, including Oculus.

In that intermediate term, Wall Street will eventually "catch up" and realize that its forecasts are low - boosting them and launching an "upgrade cycle" that will spur Facebook's share price.

And all these new technologies - each of them, separately, playing into big trends, and all of them combining to transform Facebook into a true "digital infrastructure" play - will perpetuate that upward trajectory... over the long term.

Facebook is a "wealthy investor's" stock. And it's a "Frontrunner's Stock."

Make it your stock... and grab the wealth that goes with it.

Grab the opportunities that others throw away, and there's a better chance they will make you rich.

Most Social Security payments are paltry - barely enough to live on. That's what makes Public Law 94-29 so potentially powerful. It opens the door to an investing strategy that gives you a chance to earn $4,000 per month or more. Did Congress finally do something right? Details here.

Thanks i just bought GE stock & GG .I am new to all of this so i think you all so very much for your expertise

Thanks for the nice comments.

P.S. You have a great first name …

Everything is very open with a really clear clarification of the issues.
It was really informative. Your website is useful. Many thanks for sharing!